by V. Magistretti, from Artemide 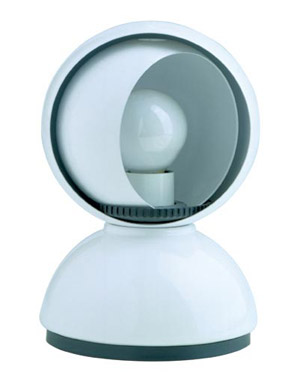 Design Vico Magistretti, 1967
Lacquered steel
Made in Italy by Artemide

The reintroduction of a modern classic to the new design enthusiasts of the 21st century. The Eclisse, with its lacquered steel body and rotating light shield can be used as a bedside, table, standing or wall mounted luminare. Available in three colors with an incorporated rotating shield, in white lacquered steel, which allows for the eclipsing of the light source and the regulation of its light emission. The Eclisse has been represented in the Twentieth Century Design Collection of the Metropolitan Museum of Art in New York, Included in the Design Collection of the Museum of Modern Art and included in permanent collections around the world.

Vico Magistretti has worked together with numerous influential firms throughout the world which have brought him award-winning designs that are exhibited at design museums worldwide. A majority of Magistretti's products, designed since the early sixties, are still in production. His colossal success is attributed to his simple and modest form idiom based on established and natural shapes while paying respect for cultural and historic values and traditions.

Italian Vico Magistretti (1920 - 2006) was a graduate of the Politecnico di Milano University in 1945 who became a follower of Ernesto Nathan Rogers. He worked initially in urban design in Milan. In the 1950s he moved into the field of mass-produced furniture and lamps. Among others, he worked for the following companies: Artemide, Cassina, De Padova, Flou, Fritz hansen, Kartell, Schiffini. Magistretti's works have been shown in the most important international museums in Europe, USA, and Japan. Some have also been included in various permanent exhibitions museums, such as the MOMA.

The Artemide light has never been solely a function of seeing, or an opportunity for formal experimentation with lamps as objects. For more than forty years, Artemide has aimed to propose light as a companion to people, as a source of physical pleasure and mental comfort. Artemide has done so, with different work groups, searching through the whole design process, starting with a declaration of values - The human light. Beyond the definition, the human light is intelligent light. A light that knows it has to relate to people, accompanying them in their daily activities.