by Benjamin Cherner, from Cherner 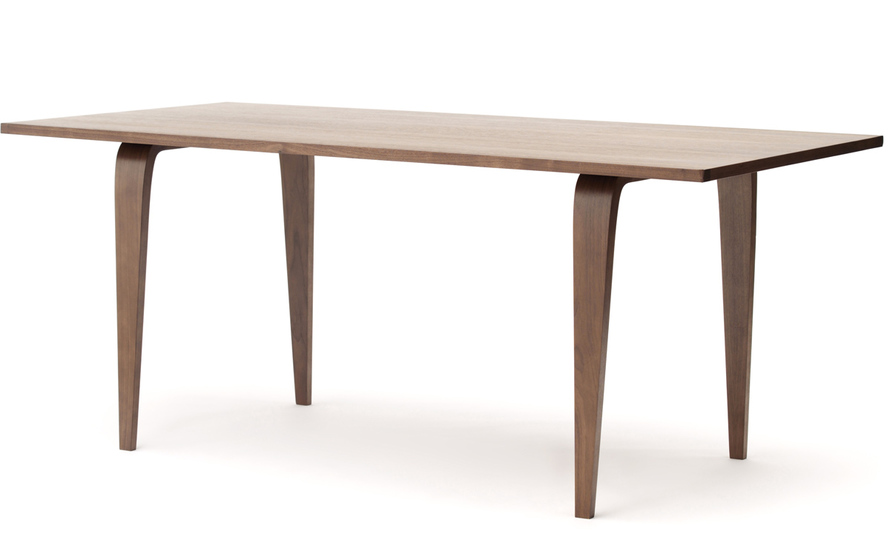 New, molded plywood tables by Benjamin Cherner (son of Norman Cherner) are designed to compliment Cherner seating in a formal or informal setting. Available in finishes to match other Cherner products. Molded plywood legs with exposed and profiled top.

Norman Cherner's sons formed the Cherner Chair Company in 1999 to manufacture and market some of the most recognized designs from their father's portfolio. As an architect and furniture designer, Ben Cherner has developed the Cherner Table series in the Cherner style of design.

Available in three size options in your choice of classic walnut, classic ebony (ebonized walnut) or European Beech veneer. Note: classic walnut products have a walnut veneer with a subtle walnut tint which give the core and walnut veneer a uniform appearance. Natural walnut products have a clear finish which emphasizes the contrast between the exposed beech core and walnut face veneer.

Benjamin Cherner is the son of the furniture designer Norman Cherner and co-founder of the Cherner Chair Company, sole authorized licensor of Norman Cherner’s designs. Benjamin heads the multi-disciplinary design studio Chernerdesign and designed the Cherner Table, inspired by and made to correspond with his father’s famous pieces. His most recent work, a duplex penthouse in New York's East Village has been featured in Dwell magazine and the New York Open House tour. Benjamin Cherner is a registered Architect in New York and Connecticut and holds degrees in Architecture from Arizona State university and Columbia University. He lives in New York City with his wife the landscape architect Emma O'Neill, and their two children Zelda and Bram.