by Ionna Vautrin, from Foscarini - sale 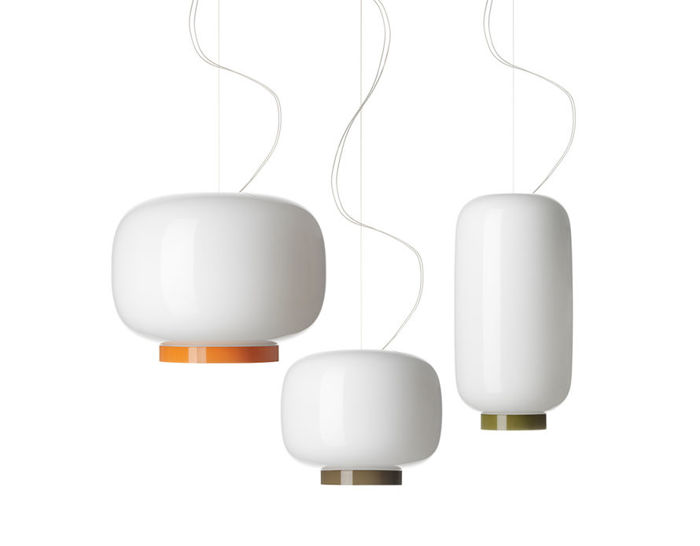 Chouchin is a Japanese word meaning those traditional symbolic paper and bamboo lanterns typically used as light and bright signs outside restaurants and bars, or as lucky charms outside homes. Simple and stylish, Chouchin teams unique craft-based expertise with a modern and strikingly simple style. The Chouchin family comprises 3 models with a colored matte glass body. Beside the original version a new one is born: Chouchin reverse. The shapes are the same but the colors have been inverted; the diffuser is now white while the collar stays the same color as the previous shape. It is not just about a new color, but rather a new light, a new use even. Indeed, Chouchin reverse, thanks to the pale blown glass diffuser, not only directs light downwards - like the original Chouchin - but it also diffuses a brilliant, flowing and emotional light into its surroundings.

Born in France in 1979, Ionna Vautrin graduated from L'école de design Nantes Atlantique in 2002.
She worked successively for Camper in Spain, and by the Studios of George J. Sowden in Italy and of Ronan & Erwan Bouroullec in France. At the same time she develops her own works with different design companies: first time with Industreal in Milan, then with the Tools Galerie in Paris and since 2010 with Foscarini.

This is a new collection of suspension lamps rather than an enlarged range. The idea of reversing colors in Chouchin is almost banal. Where color was the absolute protagonist, it now becomes a touch of elegance that distinguishes Chouchin reverse from the other suspension lamps with shiny white glass. The decoration on the collar shows uncommon artisan skill. The light diffusion is completely different from Chouchin: light is diffused into the space and aimed downwards. The other lamp components are unchanged from the original version. 400" cord length is available on request (please call the hive showroom to specify).

*Dimming capability is a 1-10V protocol which requires 5 wires and is not compatible with 3 wire setups. Please confirm your wiring setup prior to ordering.