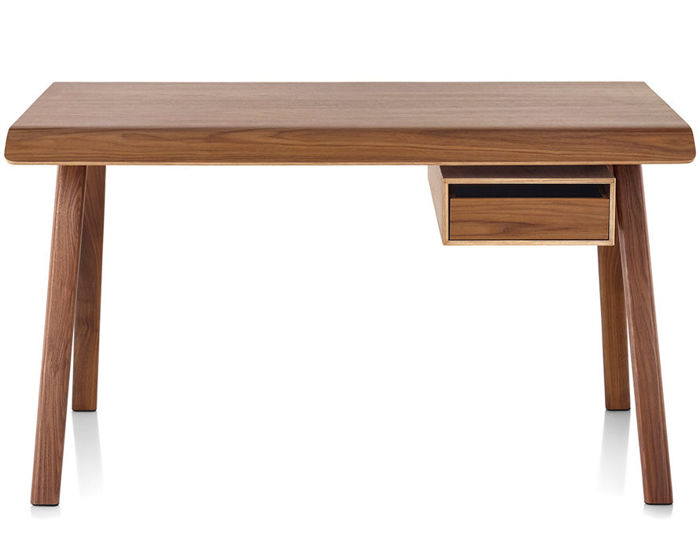 "I study very carefully how people interact with objects, and I try to capture what's meaningful in that exchange." -Todd Bracher

Equally appropriate in a small office or workroom, the Distil desk takes its job seriously without taking over. The designer ensures this equilibrium by refining the idea of a table to its essence, making it approachable, physically and aesthetically.

With the Distil desk, Bracher asked "Why are table edges so sharp?" Remedying this obvious, but rarely addressed issue led to the creation of folded edges that are easy on the arms. He continued asking questions: "How can we make it lightweight and structural?" Molded plywood was the answer. "Where would a carpenter hide the wires?" They would thread them through cutouts in the cross-stretchers. The essential nature of Distil also extends to its assembly: it goes together with a simple tool in a few minutes. In this way, constraints drove creativity.

American born designer Todd Bracher sums up his own style as 'respectful, patient and understated'. Ideas either come to him haphazardly or after a period of analysis and experimentation. Nothing, it seems is forced. The most important element of his designs is the 'respectful dialog with the user' producing products that embody his provocative theories and, most importantly, are certainly easy on the eye.

The Distil desk is offered in two sizes and features a molded veneer top in white ash, ebony or walnut with matching solid wood legs. Table includes a wire management system where wires and cords may be channeled through cut-outs. Storage options are available in a horizontal or vertical orientation with a laminate interior finish. The storage area also includes a drawer that's stained to match the desk top and may be assembled to either side of the desk.