by Niels Bendtsen, from Linteloo 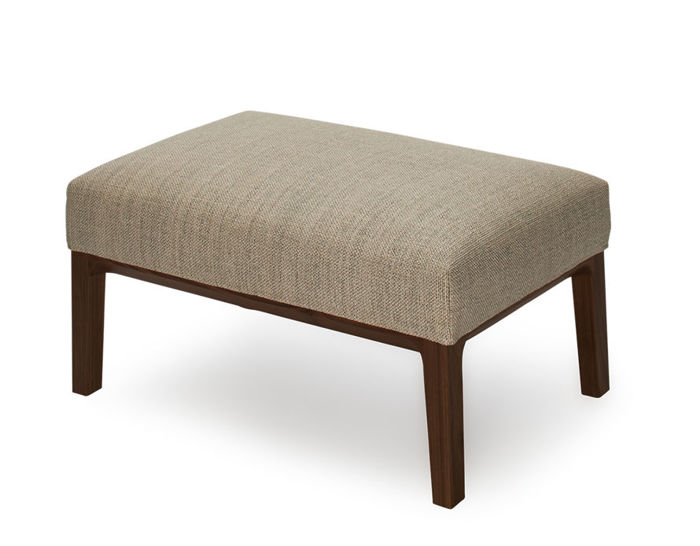 "I always strive to make a comfortable seat that will fit in all interiors. I didn't want a chair that says "look at me", but one that feels like it's always been there. My creative process generally consists of me sitting at my table sketching while listening to jazz. I wanted to make a chair that was reminiscent of Miles Davis: timeless but fresh, simple but well constructed.This is the spirit of the Miles chair." - Niels Bendtsen

Miles Footstool features a metal frame with seat made of woven rubber belts and the base is covered in polyurethane foam. The seat cushion is standard with polyurethane foam, covered in dacron. The legs can be specified in American walnut or anthracite. Upholstered in your choice of fabric (removable) or leather (not removable) upholstery.

Born in Denmark, Niels Bendtsen and his family immigrated to Canada in 1951. In place of a formal design education, he trained as an apprentice for his father, who designed and built Scandinavain furniture. Through working with his father, Bendtsen gained valuable skills and a respect for non-industrial, hand-built traditions, but he was also intrigued by new technologies and ways to satisfy incresing demand. Between 1963 and 1972, Bendtsen had his own retail store where he sold his father's furniture, as well as imported Scandinavian designs. He designed small items for the store, but it wasn't until he was in his early thirties that he truly began designing furniture. Dissatisfied with the quality and limited functionality of the furniture he received from his overseas manufacturers, Bendtsen sold his store, moved to Europe and became a full time designer.

In 1994, more than fifteen years before trend forecaster Lidewij Edelkoort declared "wellbeing" one of the most important international trends, Jan te Linteloo started a brand that radiates "enjoying the good life" in every possible way. Raised by parents who owned a furniture store in The Netherlands, he had noticed the domination of minimalism in the early nineties. British and Italian design gurus were promoting an anonimous, almost sterile interior style in which practically anything personal should be hidden in cupboards, and anything "comfortable" was expelled to the bedroom.