by Carlo Mollino, from Zanotta 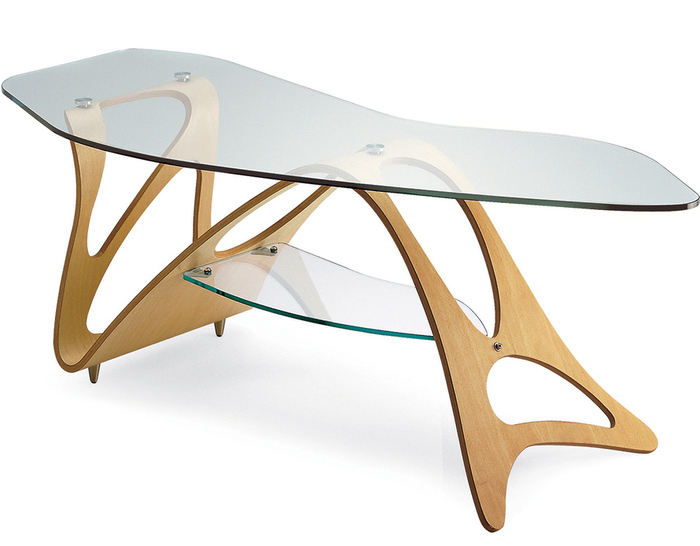 His friends called him "Carlo il Bizarro." Architect Carlo Mollino was always attempting to escape the monotony of the everyday working world. He occupied himself in numerous activities outside his profession like photography, race cars, fashion design, composed essays and also did architecture. Throughout his career, Mollino acquired numerous patents for concrete honeycomb constructions, tubular steel joints, and molded plywood elements, inventing devices for creating perspective drawings, streamlined race car bodies, automatic drift correction instruments for airplanes, and improved chain and sprocket drives for bicycles. His works have won numerous awards as well as being showcased in museums around the globe.

Carlo Mollino of Turin, Italy was more inspired by his eccentric interests than he ever was by convention. Though beginning his career as an architect, Mollino moved into other disciplines, where he infused his loves of skiing, race car driving, the female form, and the occult. Of his many works, the highest demand is made for his furniture, due to its rarity. His pieces were mostly all commissioned, and are scarce. Mollino’s interests culminate in his furniture design, which display mechanical function, the wooden angles of Alpine homes, and womanly curves. As a ski-enthusiast, he wrote a book sharing his personal skiing methods. As a photographer, he worked largely with Polaroids and used his apartment as the stylized set for his nude female subjects. One room in his apartment had an even more specific purpose, designed to be Mollino’s own tomb in which he hoped to die and remain. However; this idea, directly inspired by the Egyptian pharaohs, was unrealized. He died of an unexpected heart-attack in 1973.

Established in 1954, Zanotta is one of the recognized leaders in Italian industrial design. Guided by the insight and wonderful entrepreneurship abilities of the founder, Aureilio Zanotta, beginning in the 1960s it won and has held the international spotlight. This was thanks to its products: emblematic for both their formal and technological innovations.