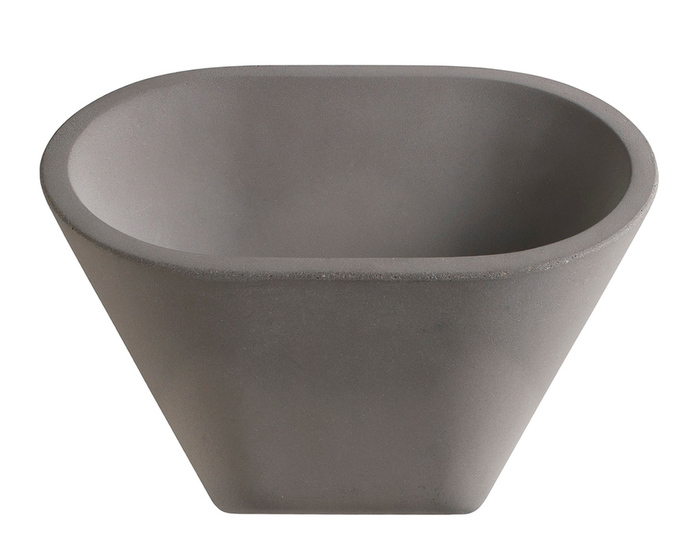 Aplomb wall lamp continues a project which begun in 2010. An exploration of the expressive possibilities of rough concrete made fluid in its mold and thrilling to see and touch thanks to its special amalgam.

Like the original hanging model, the Aplomb wall lamp has undergone a size mutation: from the world of architecture and building-echoed in its raw material - to the domestic environment. Aplomb wall lamp has retained it decisive form and the oblique movement of the diffuser merges into and dialogues with its supporting structure and allows for wider ranging light diffusion. The concrete blocks the light completely and then releases it from both the large opening at the top and the smaller one at the bottom. The beam of light directed upwards is reflected onto the wall and ceiling, lighting up the room without ever dazzling. The more delicate beam of light directed downwards, by contrast, creates a sophisticated interplay of light on the walls.

Paolo Lucidi and Luca Pevere got together at well-known design offices in Milan. In 2002 they signed their first commissions together and, in 2006, establish Studio Lucidi & Pevere in Milan. These days, Studio Lucidi & Pevere is based in Udine and still undertakes industrial design work for internationally renowned companies, belonging to a large number of different sectors.

The concrete is offered in three, colored finishes which celebrate its personality, from the traditional grey of cement in its raw state, which adds depth to the volumes, to a stylish white hue, and a warm intense brown. The Aplomb wall lamp mounts to a standard wall junction box.