by Rene Holten, from Artifort 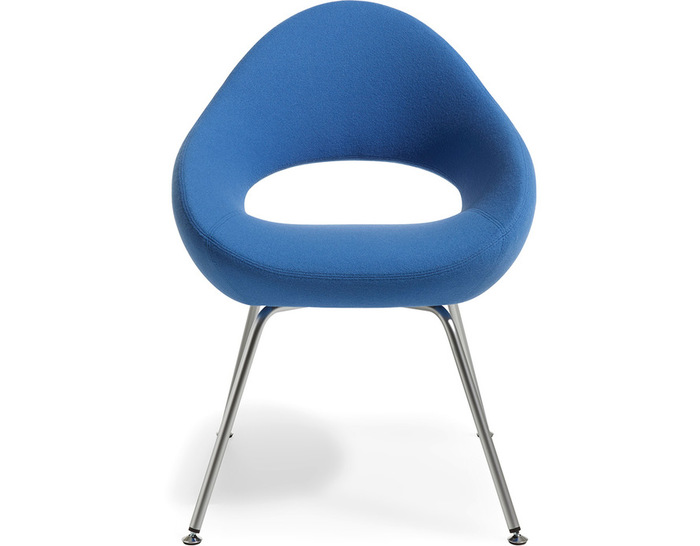 Design René Holten, 2011
Chromed steel, upholstery
Made in The Netherlands by Artifort

At Salone del Mobile 2011, Artifort presented the Shark chair - a new, extremely comfortable dining and meeting chair designed by René Holten. A model that acquired its name because its profile resembled that of the feared predator. However, you have nothing to fear from this shark. On the contrary, It's an extremely comfortable chair to sit on. Sturdy with extra back support. A delightful chair for a long evening around the table, or for a productive meeting.

Rene Holten is a graduate of the Design Academy in Eindhoven. His first design for Artifort was the DoDo in 1997, which immediately won the best Dutch Furniture Design in 1998. Holten enjoys sober, clean lines of design and seating. A large number of his designs are now included in the Artifort collection. The Lotus chair, received the Good Industrial Design award in 2009. And his Mare & More Mare sofa series is a favorite item in many living rooms. The Pinq Lounge bears his unmistakeable signature - an almost sculptural design and yet surprisingly comfortable.

The Shark gets its shape from a steel insert frame and a wooden seat that is then foam covered and upholstered. The shark is available with a 4-leg or sled-base.

Rene Holten (b. 1961) was born in the Netherlands and studied Architectural Design at the Academy of Arts in Maastricht, in the Netherlands, graduating in 1987. He established his architecture office in Switzerland in 1988. In 1990, he worked for the architect Wiel Arets. He graduated from the Design Academy in Eindhoven, Netherlands, studying industrial product design. By 1993 he started his own industrial design office.