by Ross Lovegrove, from Moroso 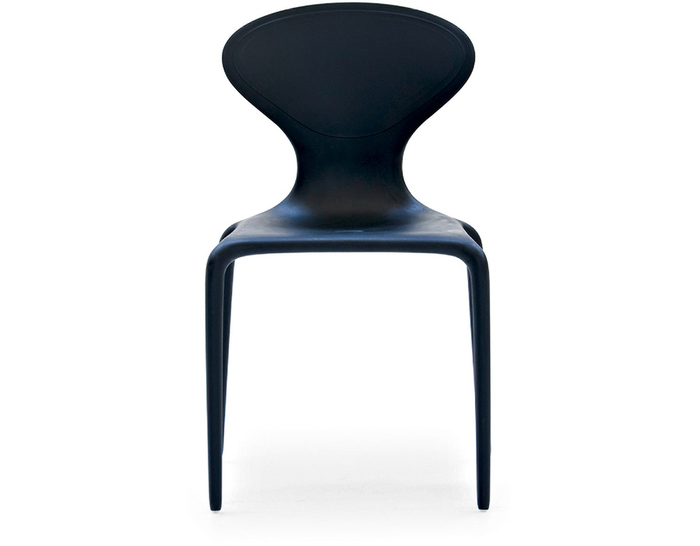 "This new stackable chair has a structure that is the result of an evolution, more than of a design process." -Ross Lovegrove

Supernatural is an important innovation in technology while introducing a design product that offers excellent value for the money. Lovegrove suggests this chair "represents a new vision of form, generated by digital data, resulting in a chair to be used every day, slender, lively and healthy. The liquid, organic nature of its form combines the beauty of the human anatomy with the most advanced process of industrialization of 21st-century polymers".

The Supernatural is proposed in two versions, with solid or perforated back. "The perforations also have the purpose of adding a multi-sensory effect to the chairs when light passes over them to create shadows that enrich the space and thus offer the architectural surfaces unexpected levels of beauty".

Born in Galles, Ross Lovegrove graduated at Manchester polytechnic in Industrial Design and received a master in Design at the Royal College of Art. He worked as a designer for Frog Design on projects such as Walkman for Sony and Computers for Apple. He later moved to Paris as a consultant for Knoll International and invited to join the Atelier de Nimes together with Jean Nouvel and Philippe Starck. Lovegrove is winner of numerous international awards, his work has been extensively published and exhibited internationally.

The Supernatural chair is colorful, stackable and, thanks to the special material used, is fade resistant and suited for the outdoors. Offered as 4-pack in the same color.

Ross Lovegrove studied design at Manchester Polytechnic and trained at the Royal College of Art in London. He has contributed to the design of the Sony Walkman and Apple computers, been in-house designer for Knoll International in Paris, co-member of the Atelier de Nimes, and acted as a design consultant to Luis Vuitton, Cacharel, Dupont and Hermés. In 1990, he created Studio X in London. Lovegrove is inspired by forms of the natural world, the possibilities of new manufacturing techniques, and the ability to evoke an emotional response in users.