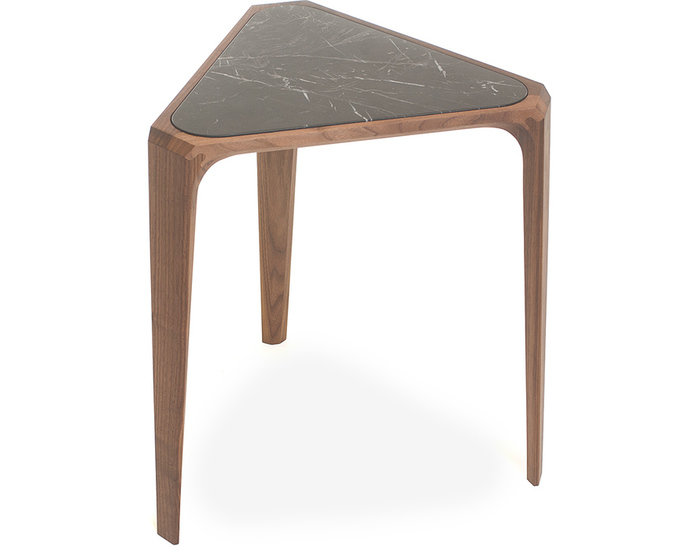 Mary's side table, crafted in solid hardwood with a marble top, is substantial yet delicate, sculptural yet highly functional. It was inspired by a visit to the Cathedral of St. Mary of the Assumption in San Francisco. Matthew Hilton was moved by the contrast of the oppressive weight of the concrete structure and the release of the swooping, expansive space within. Mary's side table captures this paradox of weight and weightlessness. Designed by Matthew Hilton for his eponymous brand, and manufactured by De La Espada craftsmen.

Mary's side table is available in American black walnut, American white oak, or European Ash in a range of finishes; and choice of white Carrara marble or black Negro Marquina marble. NOTE: The marble top is removable for ease of transport and cleaning.

Matthew Hilton (b. 1957) attended Portsmouth College of Art and then graduated from Kingston Polytechnic with a degree in Furniture Design. After graduation, he was an industrial designer and model maker until 1984. In 1985, he set up the Matthew Hilton Design Studio. In 1991, he designed the "Balzac Armchair" for SCP Limited, a company started by Sheridan Coakley in 1984 and now based in Shoreditch, London. Hilton was Habitat's top designer, and his furniture is held in the permanent collections of the Victoria and Albert Museum, London, the Geffrye Museum, London, and the Manchester City Art Gallery. He was elected a Royal Designer for Industry (RDI) in 2005, which is considered the highest honor in the field of Industrial Design in the United Kingdom. In 2007 Matthew launched his company Matthew Hilton Limited.