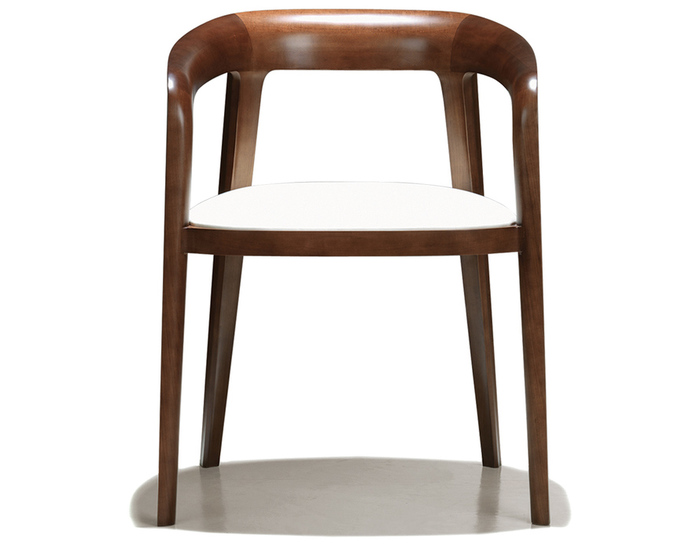 When it comes to romance, Parisians know their stuff. Created by French designer Noe Duchafour-Lawrance, the Corvo dining chair adds subtle drama and sensuality to any room. Even when tucked underneath a dining table, the hand-carved details of the back and arms make the Corvo stand out.

Born in South France, Noé Duchaufour-Lawrance is a designer of objects and interior environments. Following in the footsteps of his father, a sculptor, his artistic interests developed at an early age. Growing up in this creative atmosphere, he had the opportunity to define his own language: using natural shapes with smooth and organic lines which remain fluid and structured at the same time. After earning a degree in Metal Sculpture from the Ecole Nationale Supérieure des Arts Appliqués et des Métiers d'Art, he studied furniture design at the renowned Les Arts Décoratifs.

Corvo is offered with either maple or walnut in your choice of fabric or leather upholstery. It is Level 1 & Greenguard certified.


$1,875.00 + free shipping
(please allow 8-10 weeks for this special product to be created and shipped to your location)

Bernhardt Design was founded in 1980 by the 125-year-old Bernhardt Furniture Company. In 2001, Bernhardt Design cemented its reputation as a leader and innovator in furniture design and production by partnering with Ross Lovegrove to create the iconic Go Chair, the world's first magnesium chair. Since then, President Jerry Helling has assembled an international roster of creative talent, including Arik Levy, Jaime Hayon, Jeffrey Bernett, Lievore Altherr Molina, Yves Behar and Charles Pollock. Bernhardt Design strongly supports the rising generation of creative talent through its interdisciplinary course at the Art Center College of Design in Pasadena and the ICFF Studio program.