by Ettore Sottsass, from Emeco 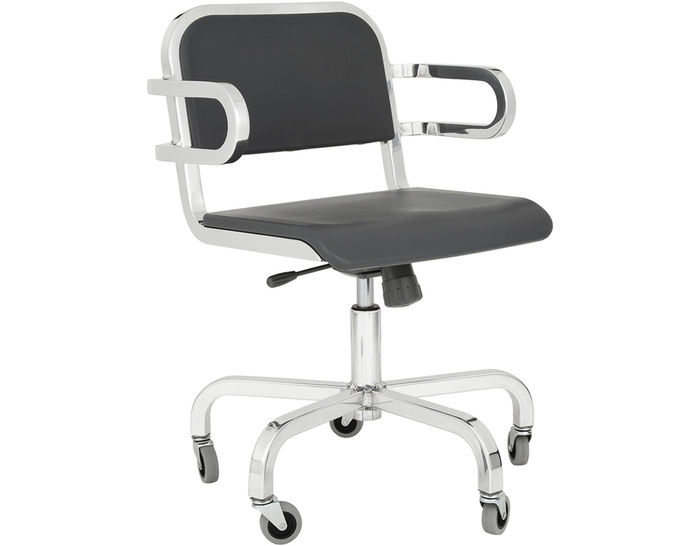 "A chair must be really important as an object, because my mother always told me to offer my chair to a lady"
- Ettore Sottsass

Before he died at the age of 90, Ettore Sottsass worked with Emeco on his last chair- the Nine-0. The inspiration was Sottsass' own Navy chair in his Milan apartment-but this time with a soft polyurethane seat and back and with or without the classic "Sottsass" arm.

Sottsass' collaboration with Emeco began in Chicago when Gregg Buchbinder, Emeco's Chariman, met him at the Chicago Museum of Contemporary Art. "The minute we met, Ettore told me he was an admirer of the Navy chair and in fact wished he had designed it. And we agreed, why not re- design it," remembers Mr. Buchbinder. "I had seen Sottsass' projects in Domus magazine over the years - Esprit, the Amazon Express yacht - in which he had used our chair. Ettore was the first designer who took our chairs out of their typical environments -navy ships, prisons, hospitals- and to use them in contemporary interior design projects. Through him Sir Terence Conran, Frank Gehry and Philippe Starck discovered the Emeco chair creating resurgence in the 1990's. It was only right to commission him to celebrate Emeco's resurrection with a new collection."

Founded in 1944 by Wilton C. Dinges, the Electrical Machine and Equipment Company (Emeco) holds on tightly to their foundation of craftsmanship, utilitarian design, and history. Their origins lie in a collaboration with the aluminum giant Alcoa to develop an indestructible and useful chair for military use in Navy submarines and warships. Today Emeco is led by CEO Gregg Buchbinder who sums up their vision as design plus craftsmanship. Looking toward the future, Buchbinder has brought in Philippe Starck and Frank Gehry. With Starck, they developed the Hudson Chair. With Gehry, they created the acclaimed Superlight chair. In 2008, Emeco launched the Nine-O Collection by Ettore Sottsass and in the following year the Morgans chair by Andree Putman, designed for the restored Morgans Hotel.