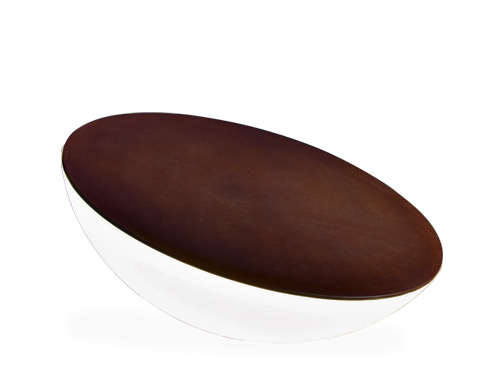 A poetic and relaxing glow, delimited by the terrestrial curve and framed by nature: this is what inspired solar. Its soft luminosity recalls that of the sun at dawn or at dusk, its hemispherical shape recalls the celestial vault, whereas the round resting surface recalls an eclipse. Not just a new lamp, but a new type of object, a contemporary hearth around which to gather and chat, at home or outside.

The outdoor Solar lamp has a straight resting surface that is flush with the outer edge, to allow the rain to just slip away. It is offered with a rotational molded polyethylene body and a porcelain stoneware top shelf.

Solar is not only versatile in the settings it blends in with, but also in the fact it can be given different positions and provide different types of lighting. The hemispherical body, made of waterproof and unbreakable polyethylene, is perfectly stable, even when it is tilted by 15°. The angling determines the quantity of light diffused, allowing multiple effects and atmospheres to be created. A bright, warm and intimate center of attraction, Solar is ideal for scenic compositions, such as a large hall or in the garden, to create suggestive light paths.