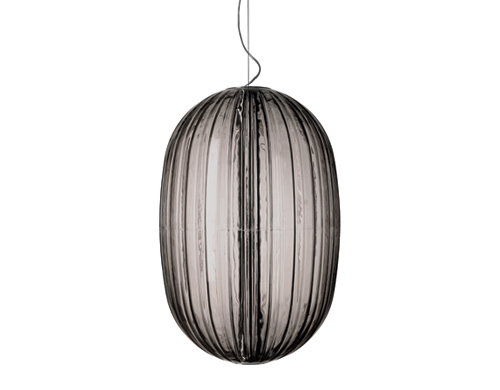 Design Luca Nicheto, 2011
Polycarbonate
Made in Italy by Foscarini

Plass (the name is a synthesis of "plastic" and "glass") interprets the millennia-old artisan tradition of glass making, in the light of a contemporary process and material: rotationally-molded transparent polycarbonate. Thanks to this technology, which is not yet widely used in the lighting sector, the finishes are not cold and impersonal, but feature slight irregularities, highlighted by the light source, as in handmade glass. The incisions, which in pearls reflect the light from the space, in the Plass lamp reflect the luminosity of the inner bulbs, in a dual confounding of perspectives: from small to large, from outside to inside.

The colors chosen for the diffuser - aquamarine and grey - are inspired by murano glass and venetian craftsmanship. As well as evoking an atmosphere and an emotion, the color helps define the shape of the lamp, highlighting the thickness of the incisions on its surface. Suspended between memory and modernity, Plass characterizes large spaces, including high ones, alone or in multiple compositions. 400" cord length available on request (please call the hive showroom to specify).