by Richard Schultz, from Knoll 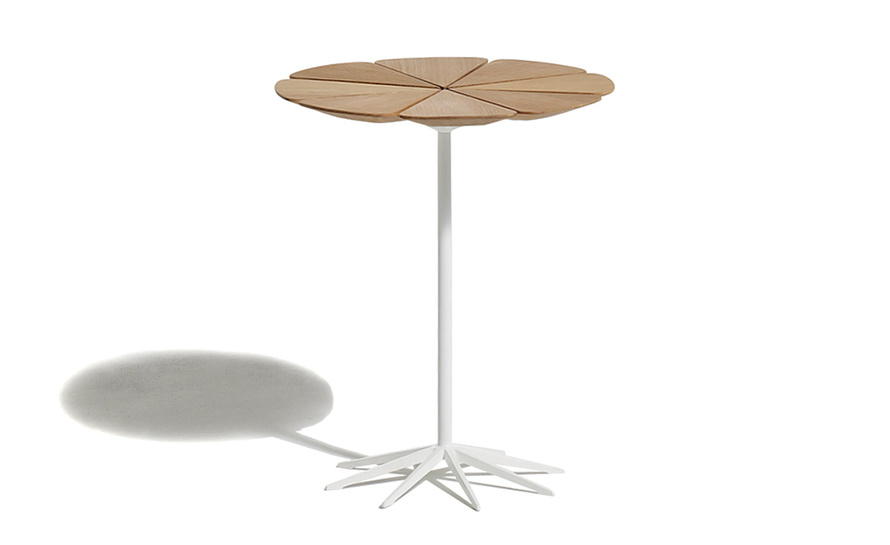 Design Richard Schultz, 1960
Aluminum, Steel, HDPE or Teak
Made in USA by Knoll

"The Petal table is a flower that is always in bloom." - Richard Schultz

"I designed the Petal Table to accompany the Bertoia Chairs that Harry Bertoia designed for Knoll. The tops on these tables are made of eight petals, which are mounted on a beautifully crafted cast aluminum spider. I was inspired by Queen Anne's Lace, a weed that grows near our house in Pennsylvania. Each cluster of flowers is supported on its own stem. By making a table in this manner there is no need for a ring support, and each petal is independent which allows the table to expand and contract with the weather." The tables were introduced by Knoll in Los Angeles in 1960 and were immediately made part of the MoMA Design Collection.

The Petal collection features an aluminum and stainless steel base and stem powder-coated in a variety of colors. The top petals are offered in either white machined HDPE (High Density Polyurethane) or vertically grained Teak with a natural finish. The collection is completed by the coffee and dining tables. Suitable for the outdoors. Please note: Teak will weather and acquire a silvery tone if left outside in the elements.

After studying at Iowa State University and the Illinois Institute of Technology in Chicago, Richard Shultz joined Knoll in 1951 to work with Harry Bertoia. He also taught basic design at the Philadelphia College of Art, and had a one-man show of his sculpture at the MoMA. In 1992, Richard Schultz began his own furniture manufacturing and design company, Richard Schulz Designs in Pennsylvania where he and his son Peter have built an impressive line of outdoor furniture collections. Significant designs over the years include the Petal Table and 1966 series for Knoll which purchased the Richard Schultz company in 2012.