by Altherr & Molina Lievore, from Foscarini 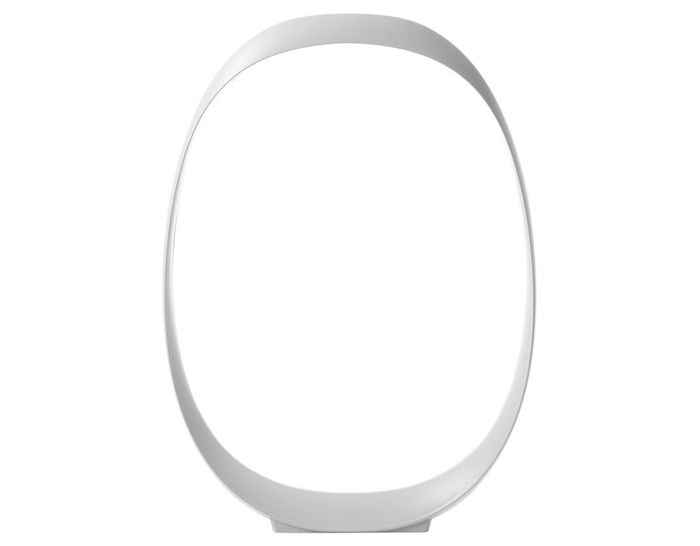 Like a fluid and enveloping frame, an irregular ellipse that gives a sense of becoming, Anisha outlines an empty space, defines it and fills it with its light, producing a magical sensation. Its plastic, dynamic shape offers itself up to the light, generating multiple reflections on its surface and revealing its sculptural essence. Anisha is not just a lamp, but a surprising personal object you will fall in love with at first sight.

The desire to emphasize Anisha's plastic nature, its balance of full and empty spaces, determined the need to hide the light source within it. This is why LED technology, with its minimal bulk, was chosen for the lamp, with a 'touch' switch that is also integrated in its shape and responds to the simple touch of a finger.

Available in white and your choice of two sizes - pure white that blends with the space - Anisha is suitable for a wide range of settings, environments and uses in the entrance, in a lounge, bedroom or on a desk, with its light spirit and unmistakable identity: both on and off.

Lievore, Altherr, & Molina was created in 1991 by the merging of its three experienced designer partners: Alberto Lievore, Jeannette Altherr, and Manel Molina. This prolific design group has designed products for Arper and is also known for interior design, and packaging. Beyond their own design, the studio deals in the consulting and art direction of various companies, always offering customized solutions. They extend this knowledge into a dedicated teaching practice too, offering seminars and training to new professionals through universities.