by Joe Colombo, from Kartell 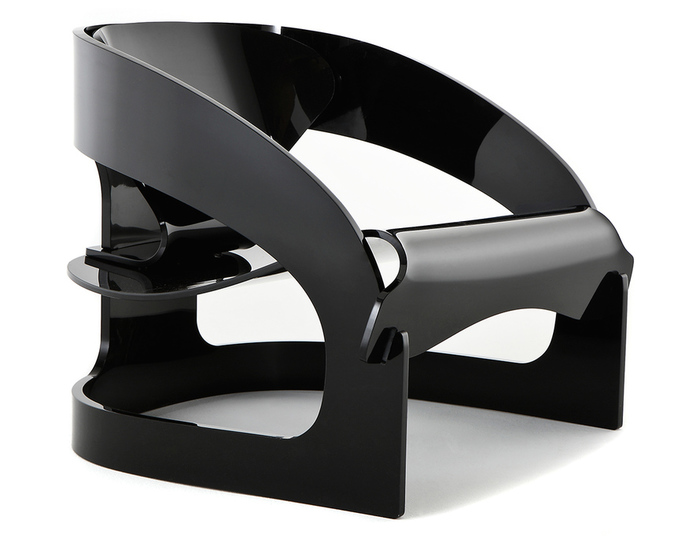 For the first time in its 60-year history, Kartell will pay homage to one of the most iconic - and perhaps uncharacteristic - pieces in its archive with the reissue of Joe Colombo’s 4801 Armchair. Originally designed by the Italian master in 1965, the 4801 chair is famous for being the only Kartell piece ever to be made entirely of wood. Now, nearly fifty years later, Kartell has developed the complex and technically challenging engineering methods necessary to produce the design as originally envisioned, in its signature plastic. An authentic symbol of design in the '60s, the highly sought-after 4801 chair is revered by private collectors and institutions alike, and has been displayed internationally at the Museum of Modern Art in New York, the Victoria & Albert Museum in London and the Centre Pompidou in Paris.

Joe Colombo, in his design utopia, gathered many of the common hopes of the 60's in Italy and Europe but was never slave to ideological bounds. His extremely fast escalation in becoming an internationally known designer brought him three medals at the XIII Triennale in Milan, the 1967 Compasso d'Oro award and creations which are included in permanent collections around the world.

Cesare "Joe" Colombo’s educational career in painting began in 1949 at the Accademia di Belle Arti di Brera in Milan, and studied afterwards until 1954 Architecture at Politecnico di Milano University. In 1951, he joined the Movimento Nucleare, founded by Sergio D´Angelo and Enrico Baj as both an active painter and sculptor within abstract Expressionism. After joining the Art Concept Group in 1955, Colombo gave up painting to promote his design career. In 1959, Colombo had to take over the family company, which produced electric appliances, and started to experiment with new construction and production technologies.