by Ionna Vautrin, from Foscarini 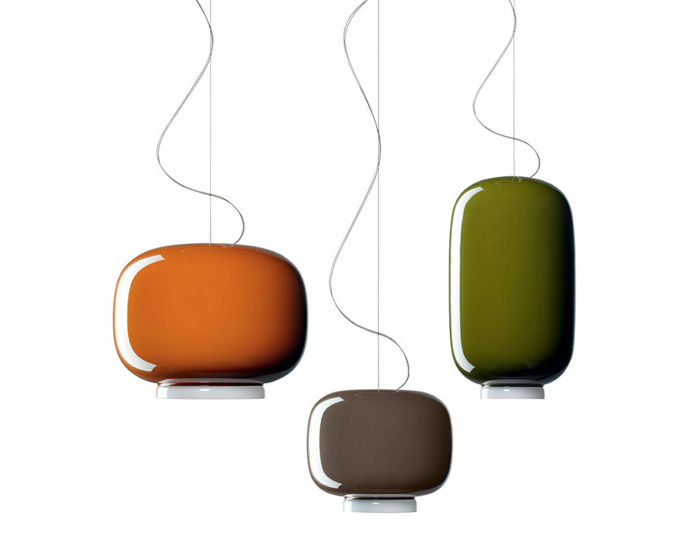 Chouchin is the japanese word for the traditional, symbolic lanterns made out of paper and bamboo used as luminous sources or as lucky charms at the entrance of the house. Reinterpreted in a more contemporary way, these lights borrow the magic and the poetry from this symbolic and ethereal japanese world. It has an essential and, at the same time, evocative design: the body made out of glass, which is obtained through a single blowing process, is closed by a white collar underneath. Color played a key role in the choice of materials: glass offers a warm surface on which the varnish produces a full, brilliant color.

Born in France in 1979, Ionna Vautrin graduated from L'école de design Nantes Atlantique in 2002.
She worked successively for Camper in Spain, and by the Studios of George J. Sowden in Italy and of Ronan & Erwan Bouroullec in France. At the same time she develops her own works with different design companies: first time with Industreal in Milan, then with the Tools Galerie in Paris and since 2010 with Foscarini.

The Chouchin family is offered in various shapes and sizes, each with its own color. Orange for Chouchin 1 (large), grey for Chouchin 3 (small) and green for Chouchin 2 (elongated). 400" in length cord available on request (please call the hive showroom to specify). Also available as a mini version.

*Dimming capability is a 1-10V protocol which requires 5 wires and is not compatible with 3 wire setups. Please confirm your wiring setup prior to ordering.