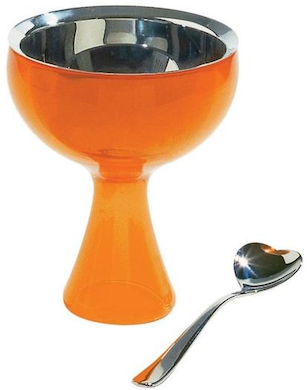 For ice cream lovers everywhere. An ice-cream set with cup and spoon in hot colors for your favorite flavor. The inside stainless steel cup can be easily taken out for washing, while the colored holder gives a nice colored translucent glow. Note the heart-shaped spoon..... this set really is for ice-cream lovers only. One of the first results of the F.F.F. (Family Follows Fiction) metaproject that aimed to explore the affective structure of shapes and objects, starting from the idea of reproducing the object creation process followed by children and primitive cultures. The result is a family of playful objects reminiscent of fairytale characters: they offer attractive answers to everyday uses, they suggest mediation through playing, and they're a bridge to the world of the imagination.

Available in your choice of colors.