by Kastholm & Fabricius, from Lange Production 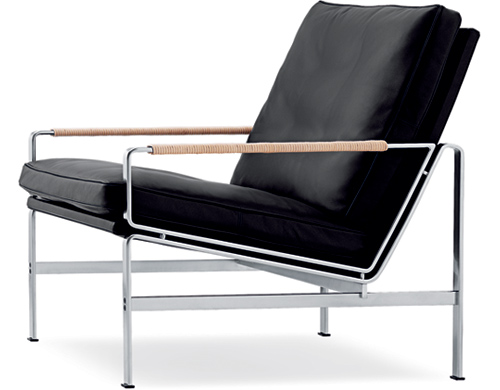 The FK6720 easy chair and sofa series was originally designed in 1968. Today, 40 years later, the steel on the chair and sofa is still being produced at the same factory and on the same tools as back in the sixties. This series is being produced with steel from 1968. The steel was found at the factory, where the chairs originally were produced. The Loose cushions are offered in your choice aniline leather colors. The units come as 1, 2 or 3-seater sections


$7,000.00 + free shipping
(please allow approximately 12 weeks for this item to be produced and shipped to your location)
there are no reviews of this product yet.

Trained cabinet-maker Preben Fabricius met blacksmith Jorgen Kastholm at the School for Interior Design and found a common approach to furniture design - never wanting to compromise on aesthetics. In 1961, the pair set up a design studio in a Gentofte cellar without any firm arrangements with manufacturers, but by ‘65 they had secured a lucrative deal with German furniture manufacturer Alfred Kill. The next year, their international breakthrough came at the Cologne Fair with a whole series of office and home furniture, leading to orders from ten large furniture concerns. Among their most successful works were the Tulip Chair, Grasshopper Chair, and Scimitar Chair, which highlighted their style of minimalist designs, both attractive and comfortable, usually in steel and leather. The pieces of furniture they produced during their seven-year period of cooperation from 1961 to 1968 were so distinctive that many are still produced today as classics.

Henrik Lange of Lange Production has had a keen interest in modern furniture since boyhood. As a 31 year old businessman at a crossroads in his life, he decided to get the reproduction rights for the rare Fabricius & Kastholm Grasshopper chair from the 1960s, a long-time obsession of his. On Kastholm's end of the deal, he wanted Lange to reintroduce the entire line and meet their original standards of quality. To do this, Lange worked from the original warehouse with the original tools. Lange Production's re-launch was met with glowing reviews. On getting his company off the ground, Lange says, "I didn't see it as 'taking a risk.' Not doing what makes you happy everyday is a risk. People should spend more time on their passions. All great companies are built on passion."