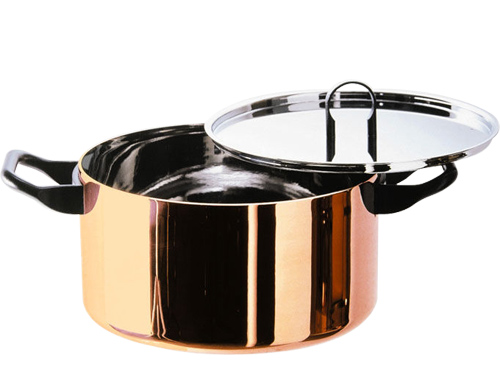 The round casserole with two handles is a perfectly cylindrical utensil, with a connecting radius at the base, two handles and a lid, characterized by a height approximately half its diameter. The project "La Cintura di Orione" is dedicated to the "private gourmet", namely those enthusiasts of intelligent and creative cooking. Most pieces of the La Cintura collection are produced in special dual lamina (outside extra thick copper + inside in 18/10 mirror polished stainless steel), which offers a more professional performance and allows the advantages of copper as far as conduction and homogeneous distribution of heat are concerned. These features are paired with extremely hygienic stainless steel inside.

Ideal for braising and especially for stewing. It's also the first pot a cook reaches for when cooking with the "covered casserole" method, a classic example being the traditional Italian Sunday roast.

Born in Munich in 1932, Richard Sapper studied philosophy, anatomy, graphics, engineering and economics. Ten times winner of the Compassi d'Oro, his prime interest is the design of technically complex objects, from ships to watches.