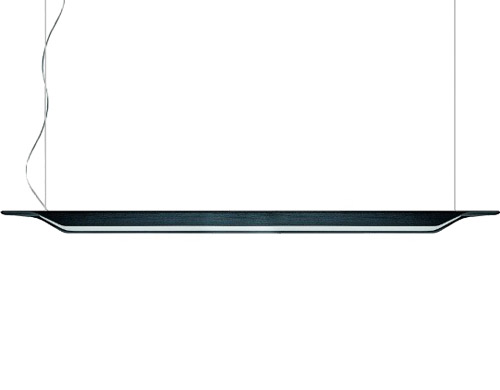 Light, linear, suspended lines that emanate a sense of natural familiarity, at home or at work and in the office: this is Troag. Inspired by a canoe-shaped wooden bowl traditionally found in Swedish homes, this brand new suspension lamp is created in multi-layered wood that is heat curved and whose edges are specially milled to create a dynamic, inclined profile, emphasized by the grain of the wood. Troag's design makes the most of the light, concentrating it downwards to light tables or surfaces in a uniform manner. An opaline screen situated beneath the fluorescent tube hides the technical components from view and allows the lamp to be used at different heights.

Genikdesign was born in 1999 from Gianpietro Gai and Luca Nichetto, formerly of "mobile design laboratory". From 1999 to present they have been producing furniture and lighting for renowned companies worldwide. In 2005 they founded "Spunklab" design group in Venice. In September 2005 "Genikdesign" settled in Treviso, Italy.

Hanging lamp in wood, Troag is offered in various finish options. Troag is a brand new signal of style and warmth in any environment, from homes to contract spaces. 400" inch cord available on request (please call the hive showroom to specify).