by Piero Lissoni, from Kartell - sale 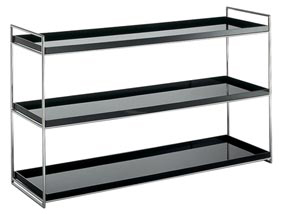 An articuled system of tops for the home or the office. The construction idea of the design is based on small tables and shelving systems, with patterns and finishes similar to lacquered Japanese trays. The tops, made in elegant, shiny black and white, solid polycarbonate, are available in three standard sizes, and are supported by polished aluminium structures of different heights, either floor-standing or on wheels. The overall design of the collection gives an impression of lightness and elegance, although mantaining stability and strenght. Thanks to the possibility of removing the metallic structures, which have a special angled lock joint, the packaging of the product is perfectly flat, rendering transport and storing operations very practical.