by Niels Bendtsen, from Bensen 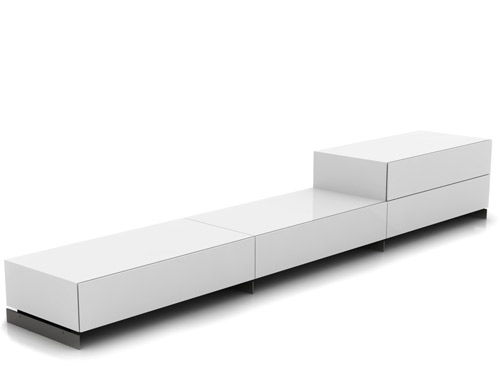 Brix is a modular stacking drawer system that can be arranged in almost endless configurations. Its versatility comes from its simplicity, resulting in a system that can be adapted, reconfigured, and expanded over time. The pre-assembled modules are combined easily using simple pin-and-cam mechanisms to create rigid units that can be stacked to any height, while a steel under-frame provides strength and stability, along with the ability to gang units together seamlessly.

Brix is made from high-density wood composite panels painted with a premium high gloss lacquer that is offered in various colors. Tops are reinforced with steel to support heavy loads, while drawers are equipped with concealed push-latch slides for silent and easy opening. The drawer boxes themselves are made with Bensen's standard European Birch plywood, but with taped top edges for a more finished look.

The two base options provide different advantages. The steel fin legs provide a way to lock ganged units together, and create the appearance of a single continuous unit. Panel bases allow units to sit low on the ground and are equipped with hidden levellers for adjustment on uneven floors. Both options ensure a tight fit when units are placed side by side.

Order one Top box, and one Base for each freestanding cabinet, plus the quantity of additional Mid box drawers required. Back side is a light grey melamine finish. Please note: fin base is more suitable for carpeted floors. Assembly required.

Born in Denmark, Niels Bendtsen and his family immigrated to Canada in 1951. In place of a formal design education, he trained as an apprentice for his father, who designed and built Scandinavain furniture. Through working with his father, Bendtsen gained valuable skills and a respect for non-industrial, hand-built traditions, but he was also intrigued by new technologies and ways to satisfy incresing demand. Between 1963 and 1972, Bendtsen had his own retail store where he sold his father's furniture, as well as imported Scandinavian designs. He designed small items for the store, but it wasn't until he was in his early thirties that he truly began designing furniture. Dissatisfied with the quality and limited functionality of the furniture he received from his overseas manufacturers, Bendtsen sold his store, moved to Europe and became a full time designer.

Bensen is a design and manufacturing group founded in 1981 by Niels Bendtsen. Along with his staff, Bendtsen designs and oversees production of an extensive line of furnishings. The Bensen philosophy balances simplicity and honesty so that the designs may continue to grow in today's ever changing world. Born in Denmark, Niels Bendtsen and his family immigrated to Canada in 1951. In place of a formal design education, he trained as an apprentice for his father, who designed and built Scandinavain furniture. Through working with his father, Bendtsen gained valuable skills and a respect for non-industrial, hand-built traditions.