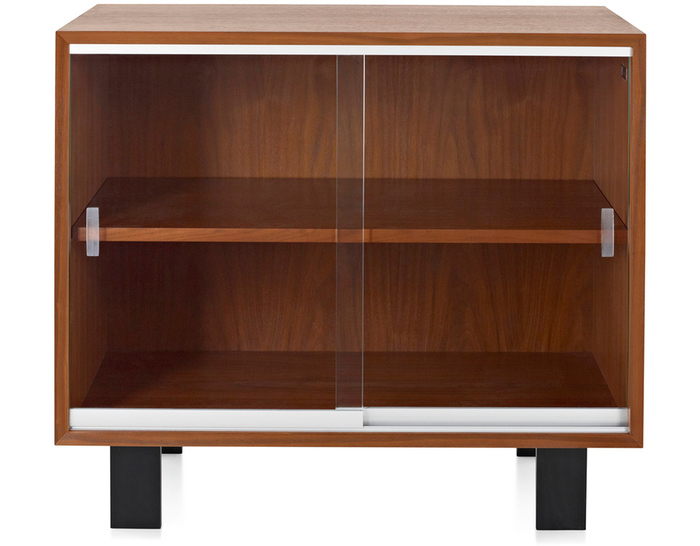 "Design is a response to social change."
-George Nelson

In the 1940s, George Nelson was at the forefront of the trend toward modernism in design. The Nelson Basic Cabinet Series, designed in 1946, is a clean-lined, functional, and versatile modular storage system that fits the way you live now and the way you will live tomorrow.

The definition of classic is "a work of enduring excellence." And the Basic Cabinet Series is a perfect example. This series consists of three medium cabinets. This one is a 34" wide closed cabinet with two sliding glass doors and adjustable shelf. You can use one cabinet alone or mix and match them with the other cabinets and Platform Bench to create a storage and seating configuration that suits your space needs.

All of these cabinets are available without legs, so they can be stacked atop each other or the platform bench, or with legs, for freestanding use. Legs are 5.5" high, black-finished, solid wood. Cabinets are available in two finish options-light brown walnut or natural oak.

Clean profiles with functional elements make each cabinet in this collection a model of efficiency. The Basic Cabinet Series is known for its practical storage areas and handsomely designed exteriors. As with everything George Nelson designed, it's all about the flexibility, efficiency and the good looks, of course.