by Arne Jacobsen, from Ameico 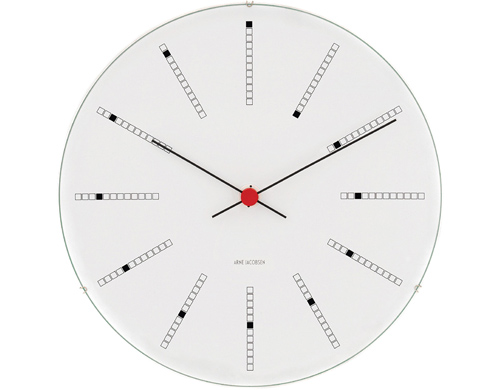 To ensure the clocks are recreated entirely in accordance with and true to the style and spirit of Arne Jacobsen, the Rosendahl design company has initiated close collaboration with the architect and designer Teit Weylandt, who for many years directed product development at Arne Jacobsen's studio and later at Dissing + Weitling.

Arne Jacobsen (11 Feb. 1902 - 24 March 1971) is one of the most influential Danish architects and designers of the 20th century. He graduated from the Royal Danish Academy of Fine Arts, School of Architecture in Copenhagen, where he was also a professor of architecture for a long period. Arne Jacobsen put his modernist stamp on architecture and design for more than 50 years - not only in Denmark but also internationally. He embodies the balancing act of elite creator and household name.

Danish architect and designer Arne Emil Jacobsen (1902 – 1971) is remembered for his contribution to architectural Functionalism as well as for the worldwide success he enjoyed with simple but effective chair designs. After a spell as an apprentice mason, Jacobsen was admitted to the Architecture School at the Royal Danish Academy of Fine Arts, where from 1924 to 1927 he studied under Kay Fisker and Kaj Gottlob, both leading architects and designers. After completing architecture school, he first worked at city architect Poul Holsoe's architectural practice. In 1929, in collaboration with Flemming Lassen, he won a Danish Architect's Association competition for designing the "House of the Future" which was built full scale at the subsequent exhibition and helped Jacobsen be recognized as an ultra-modern architect. Later, the Ant and Series 7 chairs, produced in 1952 as a collaboration with Fritz Hansen, propelled both names into furniture history.