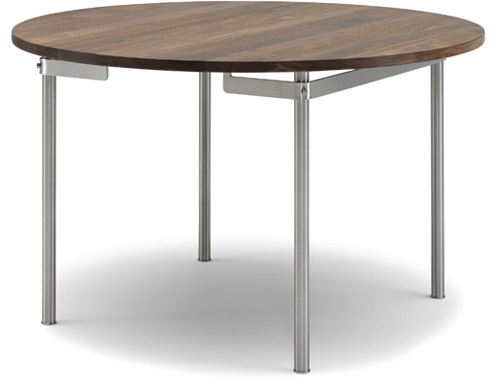 Hans J. Wegner (1914-2007) is one of the architects and designers who made Danish Design world famous. Wegner inscribes his name in the history of design first and foremost via a range of tables and chairs which are without predecessors in furniture design, yet stand in their own right as the most natural thing in the world, inevitable like new letters in the alphabet.

The simple and elegant CH388 table embodies Wegner's ideology and spirit for simplicity. Wegner, with his unique understanding of wood, its possibilities and limitations, created many designs each with its own personality yet in a consistent language. The CH388 is a modern classic, a beautiful example of Wegner's work.

CH388 is available in various wood types & finish options. Each table top is made from solid wood and the base in stainless steel. CH388 is also available in a version with optional supporting wood leg in black, which accommodates expansion leaves, please call the hive showroom for details.