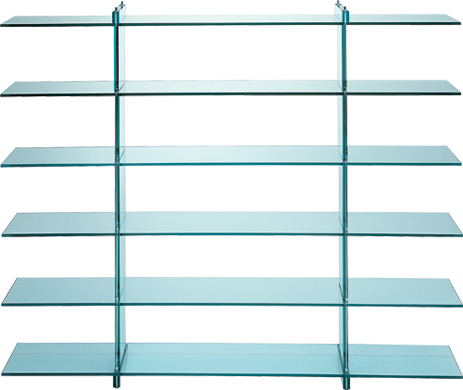 The Teso bookcase is a minimalist shelf unit which is open on two fronts. The shelves and uprights are made of 0.6" thick tempered float-glass with chromed metal ties. Thanks to its high glass-compression coefficient, tension makes this console a one-piece structure.

Renzo Piano was born in Italy in 1937. After a number of large, eye-catching projects like the Centre Pompidou in Paris (1977), San Nicaola Stadium in Bari (1989) and Kansai International Airport in Osaka (1994), he has become one of the most important architects of the 20th century. Over the years, he has received a range of prestigious prizes and awards: the Compasso d'Oro, the Pritzker Prize, the Erasmus and Kyoto awards.

Teso series is also available as a console or table.

The Fontana Arte company was formed in 1932 by Gio Ponti under the parent company Luigi Fontana, a leader in advanced glass manufacturing and design. Ponti was a skilled artist in many trades as well as the editor of Domus magazine. He had an intuition to use glass as a distinguishing feature in furniture, lamps and objects. Already designing homes, he could employ this concept in the interior decor. Fontana Arte produced many ornate stained-glass windows in churches, cathedrals, and palaces, including the Duomo of Milan and the Cathedral of Brasilia. Years later, the company has built a name collaborating with respected designers and architects. Fontana Arte continues to evolve and reach out to work with more designers and other companies.