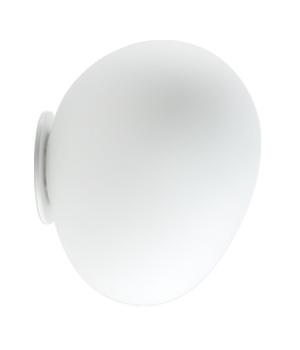 The Gregg series is a combined expression of character and simplicity. Through the personality of the shape, elegant and natural, its distinguishing feature lies in its deviation from pure geometry. Gregg demonstrates that a traditional material such as glass can free itself of standard solutions to provide original alternatives to a target in search of originality and style.

Gregg Features a white, satin-finished mouth-blown glass diffuser which envelopes the light source and offers outstanding light diffusion. The varying sizes and variants available make this a versatile and transverse series ideal for all settings.

Ludovica + Roberto Palomba are a group of architects and designers based in Milan, Italy. They primarily deal with architecture, industrial design, exhibit design, art direction, communications and marketing consulting.

Gregg is available in three sizes and also available as table, suspension and ceiling lamps. Suitable for damp locations.