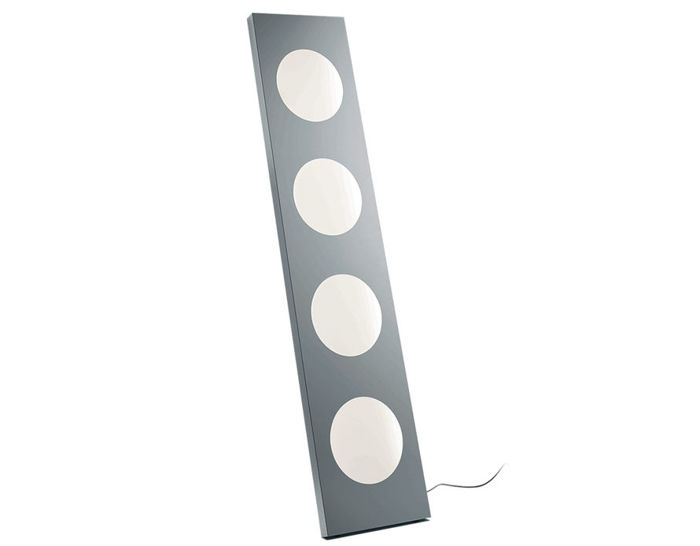 One of the most iconic designs in Foscarini's history, reworked to adapt to the new opportunities offered by LED technology: Dolmen, designed by Ferruccio Laviani in the mid-Nineties. A piece with a forceful symbolic value, expression of a lamp-sculpture concept that never escapes notice, thanks to the exceptional character of the monolithic form, with four large openings similar to the portholes of a ship, and the unusual positioning against the wall. The use of a dimmable LED source that provides warm, uniform light, has made it possible to re-proportion the lamp's design, making it slimmer in a lucid aesthetic adjustment. The finishes transform its personality, suggesting different feelings and settings: matte brushed aluminum for hightech inspiration. In all versions, Dolmen brings its forceful character and immediately recognizable personality to any space.

Dolmen floor lamp is for installation resting against a wall for diffused and reflected light. The lamp consists of a laser-cut sheet of aluminum bent using a pressure bending machine and hand-finished. The aluminum is anodized and subsequently liquid coated with transparent varnish or colored paint. There are two opaline PMMA diffusers, the front one is slightly embossed. There is a plate - also in transparent PMMA - between the two diffusers, which diffuses light from the multichip LEDs installed on the long sides of the aluminum frame. The plate is laser-engraved in the areas aligned with the portholes to concentrate the light reflection. Transparent dimmer and electrical cable, a small canopy holder is compulsory for wall anchoring.