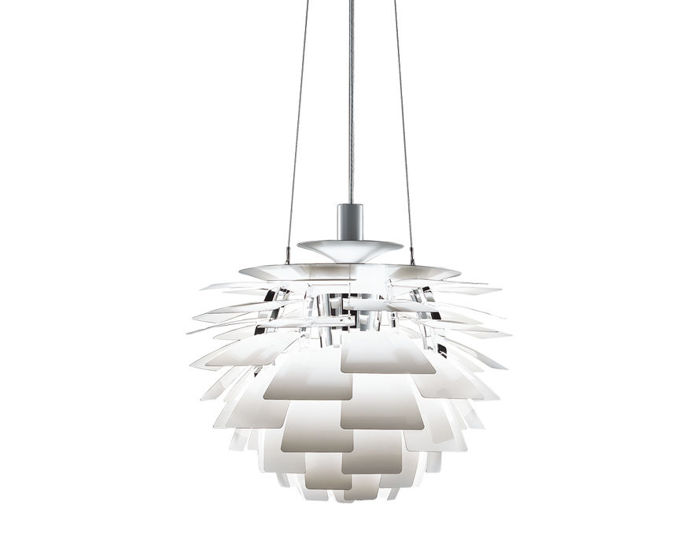 The PH Artichoke is considered to be a classical masterpiece. It was designed by Poul Henningsen more than 65 years ago.

The structure is made of twelve steel arches. On this structure PH (Poul Henningsen) placed 72 copper "leaves" in twelve circular rows with six blades in each row. Because each row is staggered from the previous, all 72 leaves are able to "cover for each other". This design allows viewing the fixture from any angle without being able to see the light source located in the center of the PH Artichoke. Interior section of the leaf is painted matte white. The original PH Artichokes were developed for a restaurant in Copenhagen called the Langelinie Pavilion, and they are still hanging there today.

Poul Henningsen was Born in Copenhagen to the famous Danish actress Agnes Henningsen. He never graduated as an architect but started practicing traditional functionalist architecture, which led to a focus mainly on lighting which is what he is most famous for. His field of occupation also included areas of writing and. At the beginning of WWII, like other creatives, he was forced to flee Denmark during the German occupation but soon became a vital part of the Danish colony of artists living in Sweden. His lifelong collaboration with Louis Poulsen Lighting began in 1925 and lasted until his death. To this day, Louis Poulsen Lighting still benefits from his genius. Poul Henningsen's pioneering work concerning the relations between light structures, shadows, glare, and color reproduction-compared to man's need for light remains the foundation of the lighting theories still practiced by Louis Poulsen Lighting.