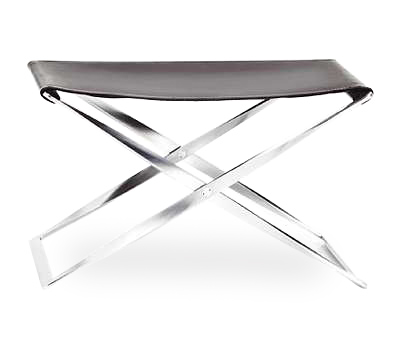 Design Poul Kjaerholm, 1961
Steel, canvas or leather
Made in Denmark by Fritz Hansen

Part of Fritz Hansen's "Poul Kjaerholm collection", the PK91 folding stool was inspired by the designs of Kjaerholm's former teacher, Kaare Klint. A sculptural form with a classic design, the PK91 is minimal yet striking. The elegant PK91 folding stool is suitable for any environment, from lounges and waiting areas to private homes.

The PK91 folding stool has propeller style legs in satin-brushed stainless steel and available in your choice of canvas or leathers.