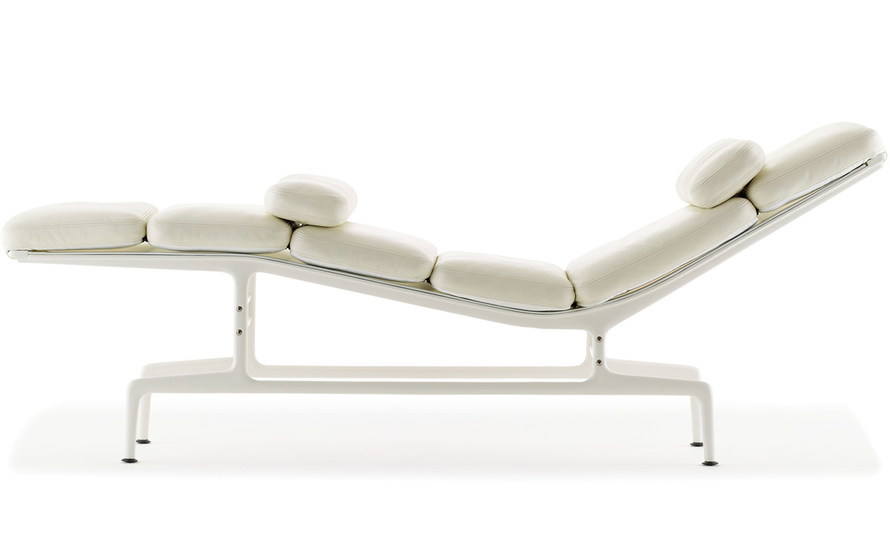 "The details are not the details. They make the design."
-Charles Eames

In 1955 while filming on location, director Billy Wilder discovered he could take quick naps on a plank held up by sawhorses. This prompted Wilder to tell his friends Charles and Ray Eames that he needed a narrow office couch. The Eameses remembered that conversation and in 1968 introduced the Eames chaise, giving the first one to Wilder. It has been produced by Herman Miller ever since.

The chaise is soft, comfortable, and just 18 inches wide. When you lie on it, you naturally fold your arms over your chest. Should you doze off, your arms soon fall to your sides, waking you up. It's a beautiful place to relax for a spell in a study, den, or executive office.

The Eames chaise features six 2.5" cushions upholstered in your choice of leather. Two loose cushions give additional support for the neck, back, or legs. The gently sloping frame puts the body in a healthful relaxed position, with the head and legs slightly raised. A scratch-resistant coating is electrostatically applied to the frame (offered in three colors). With its thin lines, leather upholstery, and sculptural frame and base, the chaise is a contemporary work of art.


(this item is on production hold)
there are no reviews of this product yet.