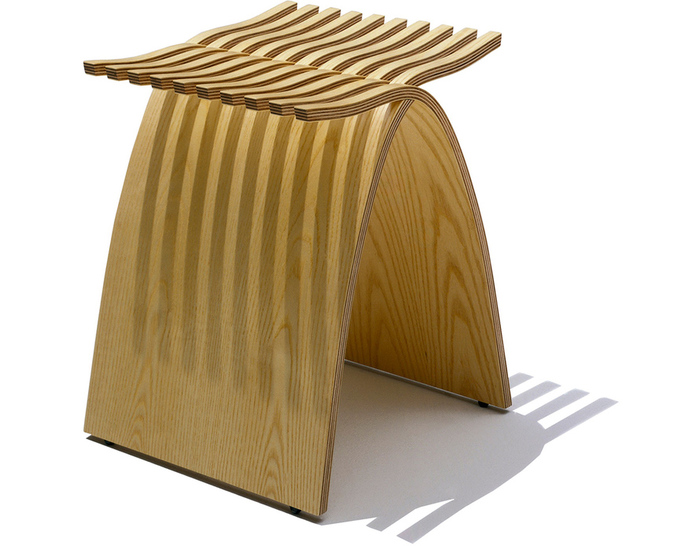 "In pondering how to improve on the simple function of a stool I found myself observing the simple act of intertwining the fingers of my hands."
-Carol Catalano

Catalano developed several ideas for the stool by studying the ergonomics of comfortable sitting. Using cardboard and foam models, she and her staff at Catalano Design took the Capelli stool's form and refined it until it was "comfortable and beautiful."

Catalano has applied her creative talents to a wide variety of products since founding Catalano Design in 1987. She finds learning about new industries one of the most challenging and rewarding aspects of her job. Catalano likes to push the current boundaries of her field and has made a commitment to include much more thinking about the end user's experience in all her designs. With the energy and enthusiasm she shows for her work, it's clear Catalano loves the career path she's chosen.

The Capelli Stool consists of two identical laminated wood pieces with undulating "fingers" molded at the top that interlock without tools or fasteners. As the surfaces between the fingers meet they become stops that hold each half of the stool firmly in place for an ingeniously stable and remarkably strong structure. Composed of 11 alternating dark- and light-stained hardwood inner plies and light ash veneer, the stool separates into two halves that stack conveniently together for easy storage.

Awarded "Silver" in the Industrial Design Excellence Awards (IDEA) of 2002.