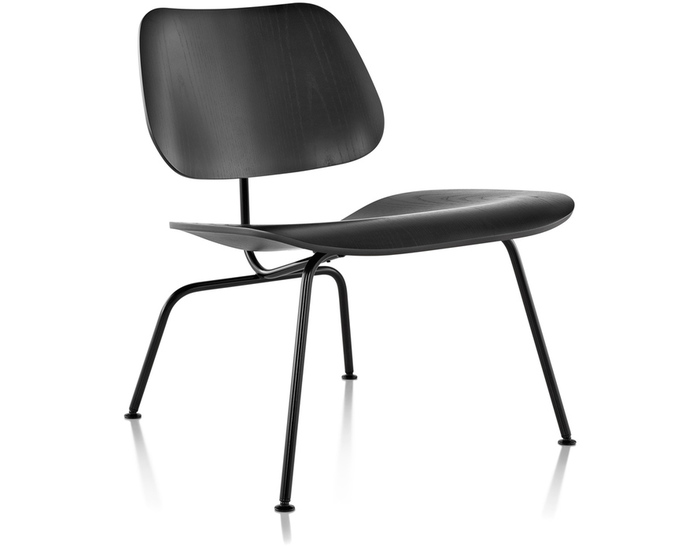 Designers Charles and Ray Eames established their long and legendary relationship with Herman Miller in 1946 with the boldly original molded plywood dining and lounge chairs. Designed to comfortably fit the body, the sculpted form of the molded plywood chairs are produced using thin sheets of lightweight veneer gently molded into curved shapes with natural rubber shock mounts to absorb movement. Since then, the chairs' aesthetic integrity, enduring charm, and comfort have earned it recognition as the best of modern design. Also available in a dining versions with steel or wood legs.

In the early 1940s, Charles and Ray Eames experimented with wood-molding techniques that would have profound effects on the design world. Their discoveries led to a commission from the U.S. Navy in 1942 to develop plywood splints, stretchers, and glider shells molded under heat and pressure. After World War II, they adapted the technology to create high-quality chairs that could be mass-produced. The process eliminated extraneous wood, which reduced the weight and visual profile of the chair and established a basis for modern furniture design. A truly comfortable chair that's suitable for businesses and homes. The chair is in the permanent collection of New York's Museum of Modern Art. Time magazine named it the Best Design of the 20th Century.

The chairs are offered in your choice of santos palisander, natural cherry, walnut, white ash or 2 stain colors. The red stain is on birch veneer, allowing the wood grain to show through; inner plies are visible. Ebony finish is stain on ash veneer; inner plies are not as visible. The lighter the stain, the more you'll see of the grain. Chair is available with self-leveling nylon glides. Black base finish has black glides; trivalent chrome base finish has white glides. Santos Palisander has an exuberant grain pattern; this can become a significant design element and has the same characteristics as the original rosewood, color and grain.