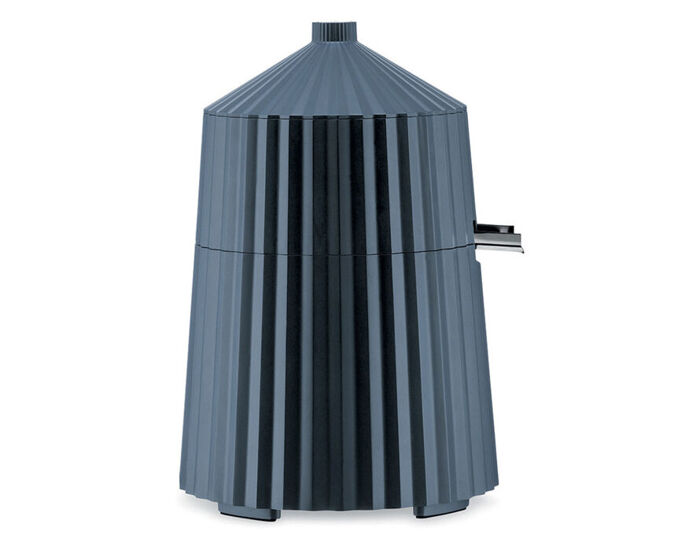 In 2018, Michele De Lucchi created the "Plisse", a kettle with a decidedly plastic and sculptural shape that quickly caught the public's interest. With its pleated design reminiscent of a haute couture dress, a beautiful object shaped by a designer, "Plisse" soon established itself as a new icon in our domestic landscape. Continuing to explore the expressive possibilities offered by the surface shaped by a dense series of folds, De Lucchi has created a small collection of household appliances, flanking the first kettle with a juicer, a blender, a toaster and a hand blender.

The Electric citrus squeezer is made from thermoplastic resin, with the sieve insert being made from stainless steel. The button on the cover operates the opening mechanism. The grooved design of the button reflects the citrus juicer's basic form. The cover prevents dust or other contamination from depositing in the juicing area when the appliance is not in use.This makes the citrus juicer not just a small object of interior design, but also ensures it is always ready for use.

- The matching cable is integrated: after use, it can be wound up under the base.
- Equipped with an automatic start/stop function: simply place the fruit half on the juicer cone and activate the juicer with gentle pressure. The mechanism switches itself off as soon as the pressure stops.
- The pourer is non-drip. It can be open, to pour the juice or closed, to stop it.
- The base is non-slip, ensuring stability during use.
- Electrical power: 80 Watt. -The thermoplastic resin used to create the container is food-safe. The material is odor-neutral, tasteless and completely free from bisphenol-A (BPA-free). It is 100% recyclable.
- Available in packaging made from recycled cardboard which features a reproduction of the original sketch by the author.