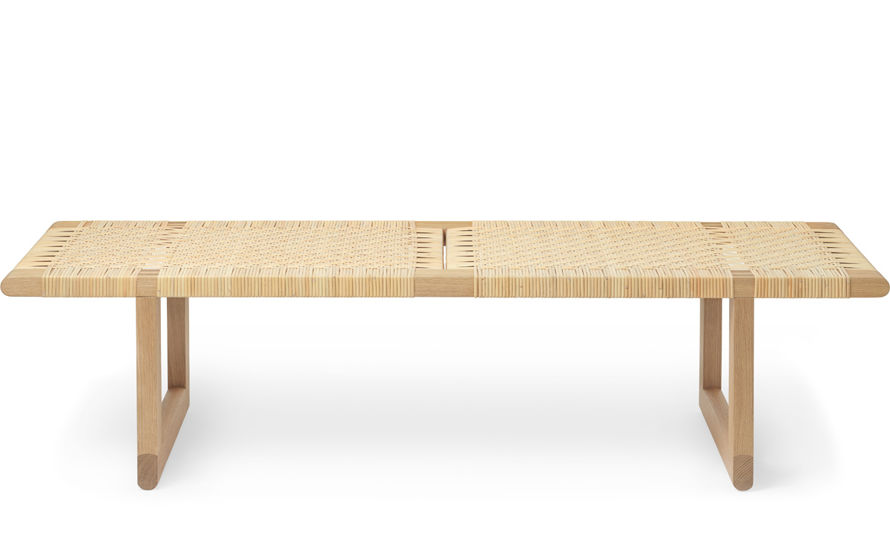 Originally designed in 1958 by Borge Mogensen, Carl Hansen & Son reintroduces the versatile Table Bench design as part of a growing collection of the renowned Danish architect and designer's work.

Versatile, timeless and carefully crafted, the BM0488 Table Bench was originally created to complement the BM0865 Daybed. The multi-functional piece forms part of Mogensen's 'building furniture' concept - enduring furniture that could be added to and adapted over time in response to changing needs and living situations. Suited to use as a coffee table or side table, the independent piece exudes wellbeing wherever it is placed. The BM0488 is crafted in solid oak, where the dense and flawless inner portion of the trunks known as heartwood is skilfully shaped with traditional cabinetry joints and rounded edges that repeat in the legs and rails. Topped with a double-woven surface, the durable and decorative design will look beautiful for generations to come.

Borge Mogensen's creative process produced long-lasting pieces with humans at the center. He became a highly-influential, post-war designer and a leading representative of Danish Modern.

Please note: BM0488 table bench is not suitable for sitting but to be used as a coffee or side table.

Borge Mogensen (1914-1972) was one of the pioneers that created the foundation for the Danish Design as a culture of furniture design. He was one of the most influential designers in shaping Danish Modern design and present day Fredericia's founding designer from 1955 until his death in 1972. His life-long ambition was to create durable and useful furniture that would enrich people's everyday lives, and he designed functional furniture for all parts of the home and society. Mogensen's ideal was to create furniture with a restrained aesthetic. He believed that furniture should create a sense of tranquillity and have a modest appearance that encourages people to live their lives unpretentiously.