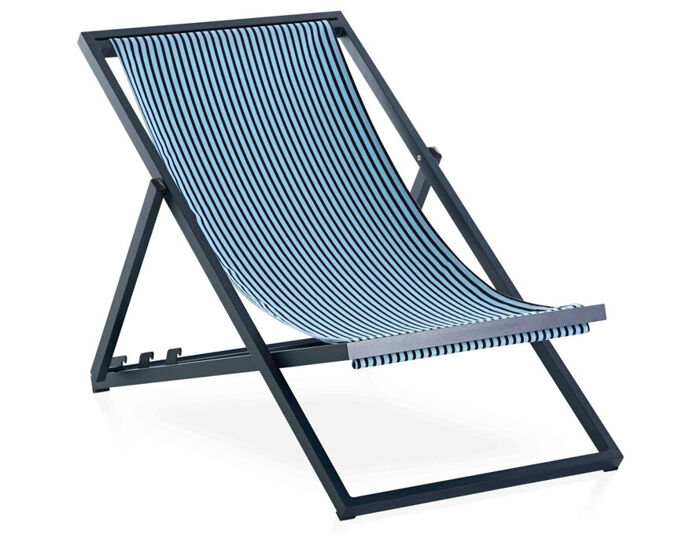 Picnic is an improved version of the traditional folding garden deckchair. With a lighter and more hard-wearing design making it easier to carry to the beach or the park, Picnic can also be left outside permanently in all weather conditions. It's the ideal companion for enjoying a day out in the open air, plus it can be used at home both indoors and outdoors as it's foldable and very easy to carry around.

Read, rest and relax, sunbathe... the back has three positions, at 105°, 120° and 130° so you can use it for all kinds of occasions. It's made from an ergonomic plastic fabric and has an aluminium structure, making it much more resistant to sun, water and salt than the traditional wood and canvas versions. Plus, both these materials need less maintenance.

José Antonio Gandía-Blasco Canales was born in Ontinyent, Valencia. After studying law at the Valencia University, he joined the family business GANDIA BLASCO, a blanket manufacturer. After travelling throughout Spain as a business agent, he began to take on more responsibilities which led to reshaping the image of the company. The current logo was created, the silhouette of a graceful kitten, as well as the first reversible design carpet collection, which later received the IMPIVA Award 1990 for innovation. José A. is not only president of the company but also the art director. He has designed a large part of the furniture and textile collections that are being commercialized today.

Gandia Blasco began as a family business in 1941, manufacturing blankets before becoming known primarily for their outdoor furniture. Located outside Valencia and managed by Jos3 Gandia-Blasco (father of Jose Antonio, current company president), the company mainly employed people from neighboring towns and remained in the blanket business until the mid 1980's. International competition pushed them to modernize, and they did so by expanding into the carpet and textile markets. Their success with outdoor furniture came when Jose Antonio was furnishing his home and developed the "Na Xemena"? line with the house's architect, Ramon Esteve. This collection popularized the company and caused a change in approach and philosophy to combine comfort with functionality and aesthetic integrity.