by Marcel Wanders, from Alessi 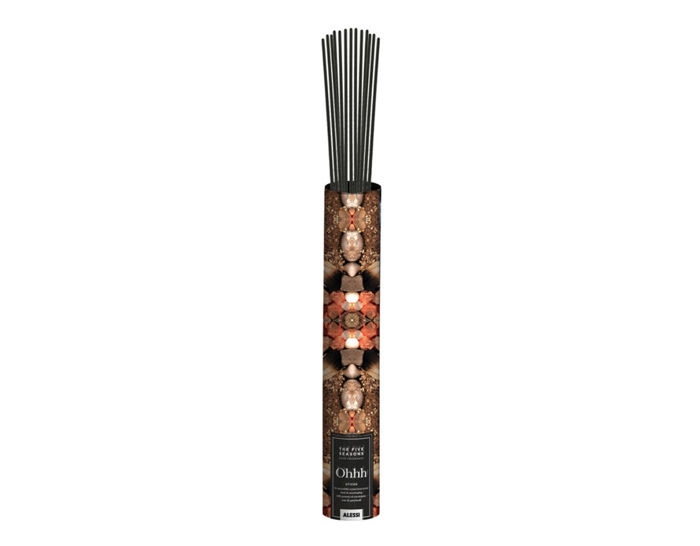 Design Marcel Wanders, 2019
20 incense sticks per box
Made by Alessi

The scents of Alessi Home Fragrances represent the transformative, cyclical seasons of life and nature - from blossoming to decay and the mystery of celestial bodies. The Five Seasons collection is a love song to nature, which is celebrated through the domestic recreation of the seasons.

Three different incense fragrances are available. "Shhh", dedicated to the season of transcendence, is deep and enveloping, born from the union of eucalyptus, cloves, rose, cedar wood, patchouli, sandalwood and precious woods. "Ohhh" is an homage to the Sun, a full, masculine and wild fragrance that is composed of leather, musk, sandalwood, spicy notes, ginger, cinnamon, mineral notes and amber. "Uhhh", dedicated to the Moon, is feminine, aquatic and magical, created by the union of iodine, marine notes, white flowers, jasmine, lilac, ambergris and white musk. Perfuming rooms with incense stems from an age old tradition, with which Wanders dialogues, proposing an object with a contemporary, poetic and innovative design.

Each scent includes 5 packages with 20 incense sticks each. Lily incense burner sold separately. A must-have accessory for those who love the slow spread of scent in the air that creates a fragrant and welcoming space.