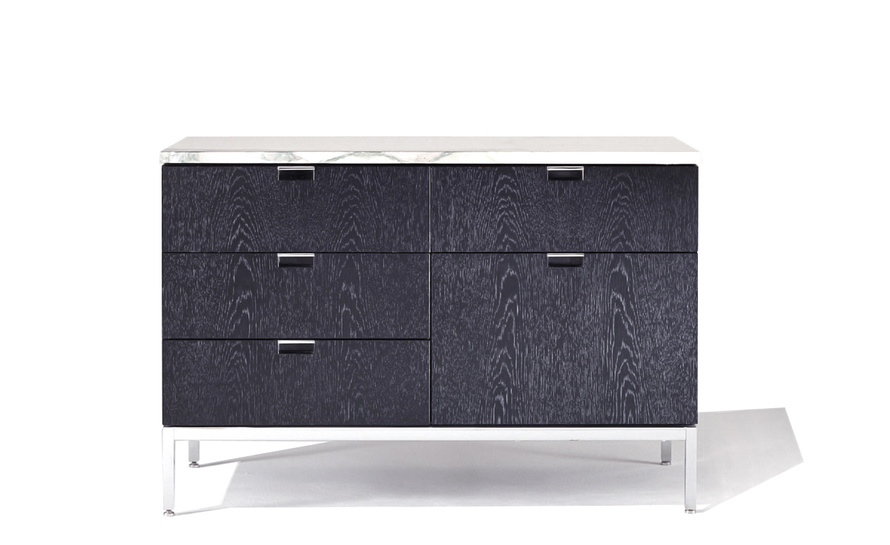 Like so many of her groundbreaking designs that became the gold standard for the industry, the 1961 executive collection, including the series of credenzas, made their way into the pantheon of modern classics. Florence Knoll's designs are reserved and cool, severe and angular, reflecting the objective perfectionism of the early 1960s.

While a student on the campus of the Cranbrook Academy of Art, Florence Knoll Bassett became a protegée of Eero Saarinen. She worked briefly for Walter Gropius, Marcel Breuer and Wallace K. Harrison. In 1946, she married Hans Knoll, after which they formed Knoll Associates. As a pioneer of the Knoll Planning Unit, she revolutionized interior space planning with her belief in "total design" - embracing all aspects of design principles which were radical departures from the standard practice in the 1950s, but were quickly adopted and remain widely used today. For her extraordinary contributions to architecture and design, Florence Knoll was accorded the National Endowment for the Arts' prestigious 2002 National Medal of Arts.

These elegant credenzas are offered in your choice of wood veneer on the sides & back panel, and a choice of either wood or marble tops. All the credenzas have polished aluminum pulls and a 3/4" thick top. Wood tops are finished with a transparent polyurethane coating. The base is available in either a polished or satin chrome finish.

This credenza features four box drawers (each with one removable partition), and one full extension file drawer with two metal bars for file hanging. The Florence Knoll credenzas are also available with other finish options and in various configurations. Please call for details. Optional central locking secures drawers and doors instantly with one single key lock.


$9,432.00 + free shipping
(please allow 8-12 weeks for this special credenza to be created and shipped to your location)