by Hans Wegner, from Fredericia - sale 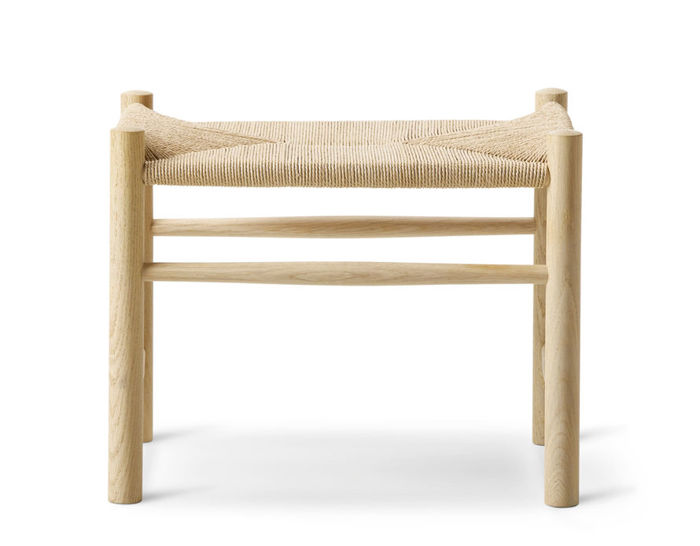 "A chair should have no back side. It should be beautiful from all sides and angles" -Hans Wegner

Hans J Wegner's simple corder seat stool is an example of the Danish tradition of designing modern furniture using sticks and dowels. The J16 stool can be used as a footstool as well as a standalone seat.

World-renowned designer of iconic Danish chairs, Hans J. Wegner (1914-2007) insisted on infusing his functional designs with a poetic and playful edge. Wegner's essential rocking chair, the J16, was designed as part of a program to popularize the idea of simple modernism led by Børge Mogensen during the 1940s in Denmark. Designed in 1944, Wegner's rocker with the sensually curved arms was inspired by traditional Windsor and Shaker furniture, fused with Wegner's poetic lines.

Hans J. Wegner is acclaimed for his chair designs that made mid-century Danish design popular on an international scale. He began his career as a cabinetmaker in 1932, subsequently studying at the Copenhagen School of Arts & Crafts. Throughout a long and productive life, Wegner designed roughly 500 chairs, many of which have become popular classics that are still in production today. Wegner's furniture is exhibited in prestigious design museums around the world, and he has received several honors and awards.

The J16 stool is available in a variety of wood options with a natural, hand-woven paper cord seat. Optional seat cushion can also be ordered for the J16 stool (please call the hive showroom to specify).

Fredericia Furniture began as a thoroughly Danish design house, born of a proud heritage. A heritage of unfaltering dedication to the perfection and progression of the design craft. Simple principles guide us along in our ambition to create and deliver a collection that we believe will be the modern originals of tomorrow. Simple principles that honour outstanding quality through a careful selection of materials, functionality and attention to detail.