by Marcel Breuer, from Knoll - sale 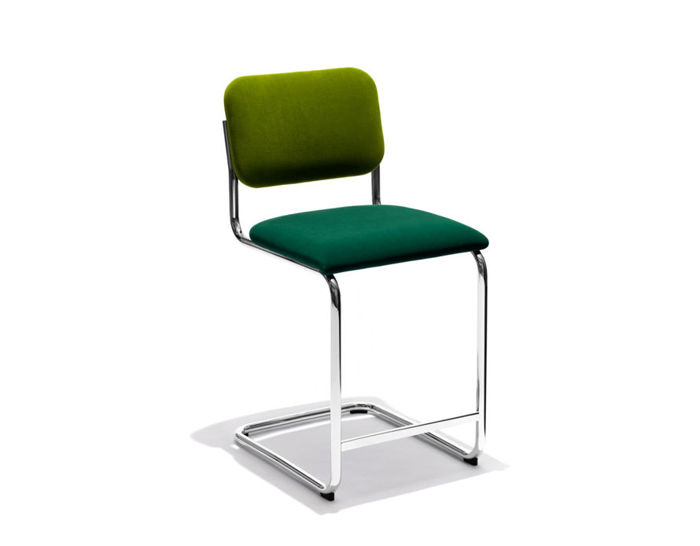 Marcel Breuer conceived the first tubular steel chair, in 1925, based on the tubed frame of a bicycle. His revolutionary Cesca chair, named after his daughter Francesca, marries user-friendly caning and hardwood Beech with the industrial-age aesthetic of cantilevered tubular steel.

In honor of the 100th anniversary of the Bauhaus, Knoll has reintroduced Marcel Breuer's iconic Cesca chair with new bar and counter armless stools. Functional, simple and distinctly modern. Knoll is the only authorized and licensed manufacturer of the Cesca chair. Marcel Breuer's signature and Knoll studio logo are stamped into the base of each chair to verify authenticity.

Protégé of Bauhaus founder Walter Gropius, Marcel Breuer embodied many of the School's distinctive concepts and was and one of the School's most famous students. He returned to teach carpentry from 1925-1928, during which he designed the tubular-steel furniture collection. His attention drifted towards architecture, and after practicing privately, he worked as a professor at Harvard's School of Design under Gropius. Breuer was also honored as the first architect to be the sole artist of an exhibit at the Metropolitan Museum of Art.

The Cesca stool features a 1" inch diameter round steel tube with chrome-plated and polished finish frame. The cane inset stools feature machine-caned insets framed by hardwood beech seat and back frames in natural clear lacquered or matte ebonized finish. Stools include black plastic anti-tip front glides to provide stability and prevent the stools from tipping forward and black matching back glides. Also available fully upholstered with urethane foam over molded plywood seat and back. Split upholstery or cane back and upholstered seat can be specified by calling the hive showroom: 1.866.663.4483.


$852.00 + free shipping
(please allow 8-10 weeks for this special product to be created and shipped to your location)