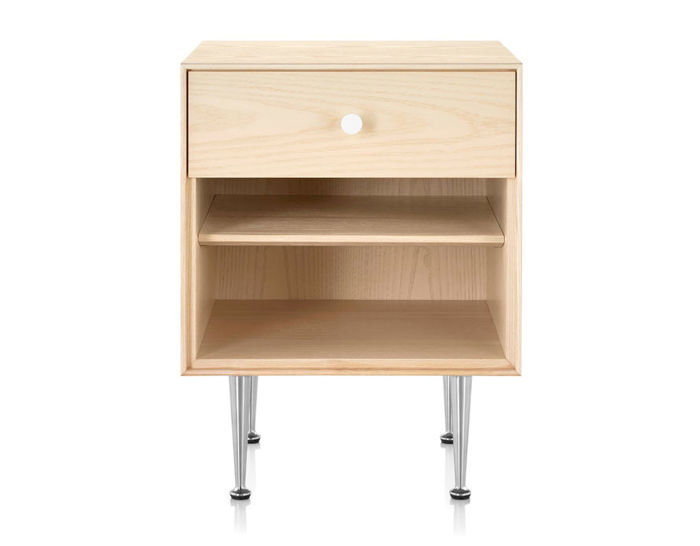 "Design is a response to social change." -George Nelson

Designed to look and feel exquisite, these cabinets, chests, and cases were produced in 1952 as application of George Nelson's continuing exploration of storage furniture, first introduced in 1945 in a Life magazine feature on his modular "Storagewall" concept.

Originally called the Rosewood Group due to its use of rosewood veneer, this group was later renamed after the feature that gives it its aesthetic quality: the thin edge framing the doors and drawers. Fifty years since they were last available, the pieces are updated with environmentally sustainable veneers and finishing processes, including santos palisander, which shares - and honors - the rich personality of rosewood.

Comprised of a drawer with soft closing slides and an open shelf space, the Nelson Thin Edge Bedside Table effortlessly merges storage and display. Finished in a variety of wood veneers and your choice of drawer pulls with polished aluminum legs, it is perfect for the nook next to the bed, and suitable for a range of modern settings. Back panel can be requested finished to match or unfinished (matte black). Ships ready to assemble, drawer pulls need to be attached. Please note: it should be expected to have variation in both grain & color characteristics between multiple products...no 2 products will look exactly alike.