by S. Giovannoni, from Alessi 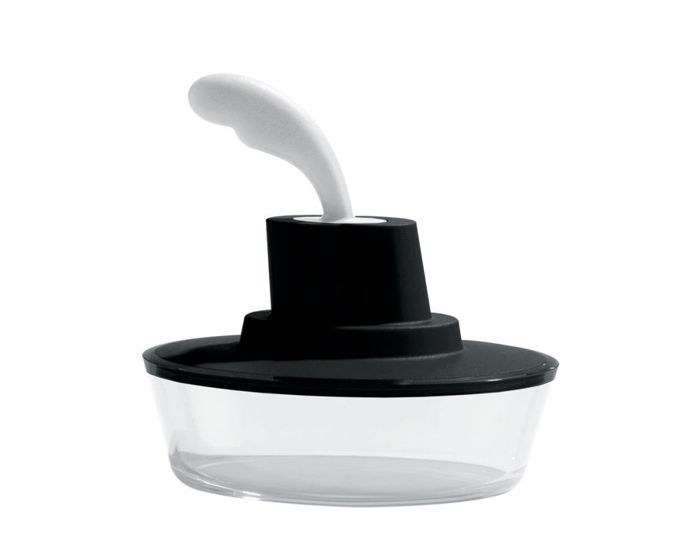 The Ship Shape container is part of Alessi's line of playful objects for the home. A fun design which offers a lidded container with a concealed spreader/spatula for cutting or spreading. A perfect fit for a stick of butter or soft cheese. Very cute and uninhibited approach that is becoming more of the fashion in design for the new century.

Architect and designer, Stefano Giovannoni has explosive talent, able to embody the complex system of 'affective codes' in his projects. His great approach has won him the title of best 'Super & Popular' designer of 2000.

Stefano Giovannoni was born in La Spezia but graduated in Architecture in Florence in 1978. Since 1979 he has taught and done research at the Florence Faculty of Architecture. He is master-professor at Domus Academy in Milan and at the Università del Progetto in Reggio Emilia. He works as an industrial and interior designer and architect in Milan, where he currently lives. He has worked with companies like Alessi, Flos, Magis, Seiko, Pulsar, Cappellini, Kankyo, Saab, etc. and received numerous prizes and recognition for his designs. His work for Magis included the highly successful “Bombo” stool and his “First” chair, both which produced an imitable style. He has been called the “most bankable” designer and the “King Midas of Design.”