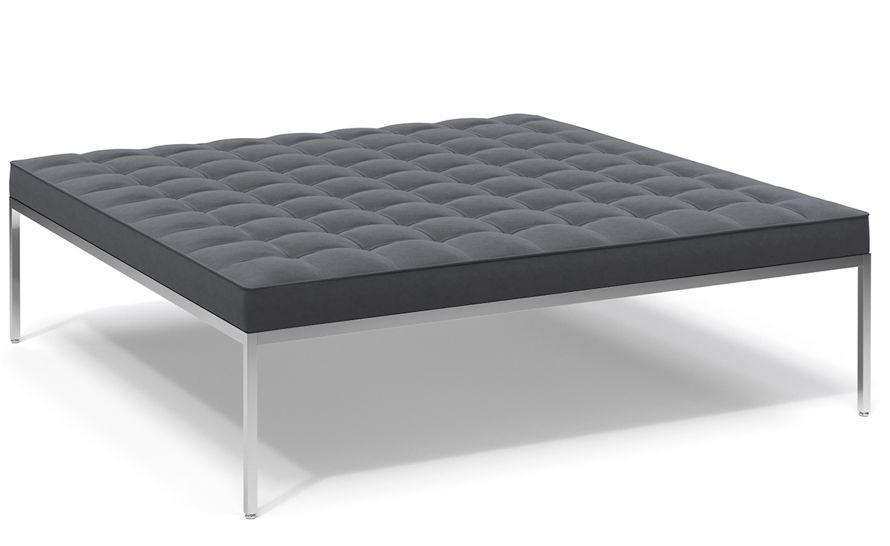 Used as a bench, ottoman or coffee table, new Relaxed Benches bring a softer sit and new sizes to the Florence Knoll Collection. The original design has been updated with a lower horizon to complement today's more casual lifestyle. Consistent with all of her designs, each piece has a spare, geometric profile that reflects the objective perfectionism and rational approach Florence Knoll learned from her mentor, Mies van der Rohe.

While a student on the campus of the Cranbrook Academy of Art, Florence Knoll Bassett became a protégé of Eero Saarinen. She worked briefly for Walter Gropius, Marcel Breuer and Wallace K. Harrison. In 1946, she married Hans Knoll, after which they formed Knoll Associates. As a pioneer of the Knoll Planning Unit, she revolutionized interior space planning with her belief in "total design" - embracing all aspects of design principles which were radical departures from the standard practice in the 1950s, but were quickly adopted and remain widely used today. For her extraordinary contributions to architecture and design, Florence Knoll was accorded the National Endowment for the Arts' prestigious 2002 National Medal of Arts.

* Available in a range of KnollTextiles and Spinneybeck leathers.
* Exposed metal frame and legs in heavy gauge steel and inner frame of solid wood.
* Seat cushion tufted and covered with polyester fiberfill to enhance comfort.
* No buttons on textile or leather upholstery.
* KnollStudio logo and Florence Knoll's signature are stamped into the base of the frame
* available in a variety of size options.
* includes black nylon non-adjustable glides.