by Eero Aarnio, from Magis 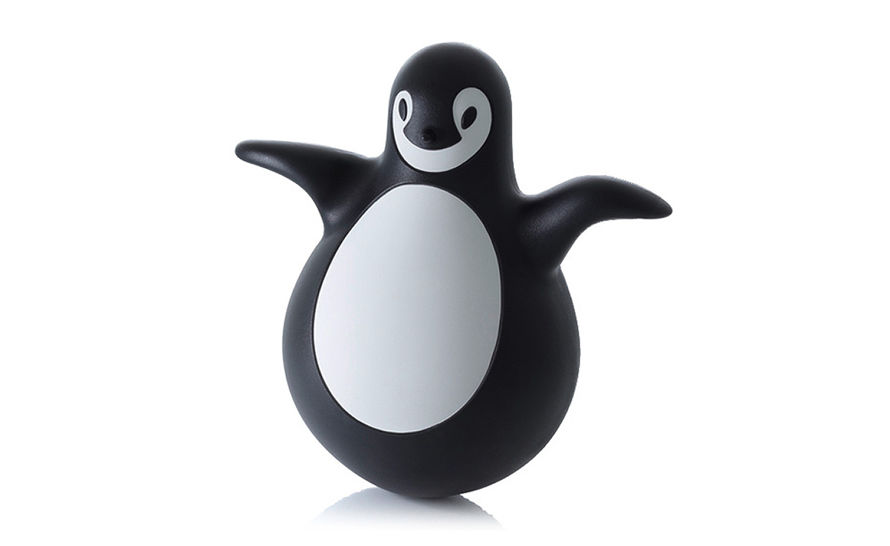 Design Eero Aarnio, 2011
Rotational-molded polyethylene
Made in Italy by Magis

"... As a young boy I made my first penguin out of paper pulp (papier-mâché) and when it was dry I painted it black and white. For years this 20 cm high penguin lived on top of the cupboard in my childhood home. Unfortunately my apartment was destroyed in the 40's during the bombing of Helsinki and the penguin was lost in the mayhem of war. Now thanks to Magis I have again my penguin chick. The shape of the head and the profile with the cute beak have the right proportions and the eyes have the realistic almond shape characteristic to penguin chicks. This little penguin has perhaps had a little too much to eat and therefore has the round belly, but this particular rotund shape allows it to mimic the realistic waddling movement, which makes it so lovable and cute." - eero arnio

Pingy the penguin is made from rotational-molded polyethylene and features a black body with details painted white.

Eero Aarnio of Helsinki introduced his Ball Chair in 1963, one year after starting his own office. He followed suit with his Bubble Chair, floating Pastil Chair, and Tomato Chair. Using mostly plastic and fiberglass (though he would later abandon fiberglass due to its potential danger to manufacturers), Aarnio’s chairs implemented simple geometric forms and were thus popular as set pieces in 1960s science fiction films, and remain recognizable as such. Many of his furniture designs display a playful element, and currently Aarnio’s new designs include toys, children’s furniture, and combinations of both.