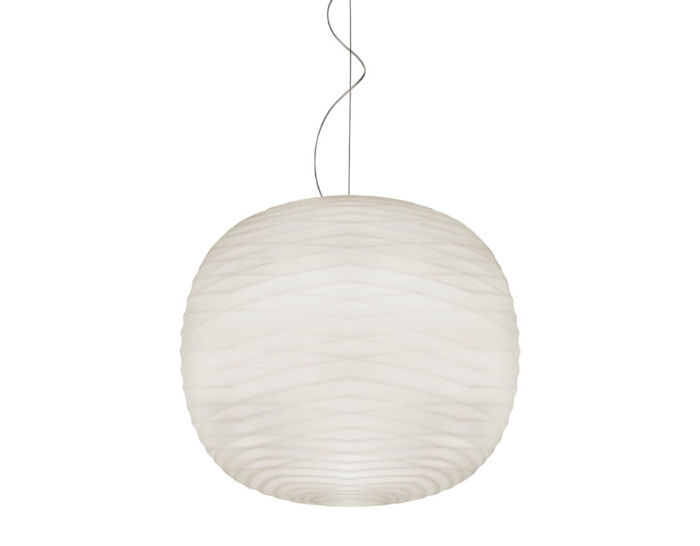 A fluid vibration on glass. Three-dimensional facets inspired by the reaction of a liquid subjected to multiple sound waves. The distinguishing feature of Gem lies in its irregular glass surface, where the thickness of waves and reliefs changes continuously, creating unexpected and delightful textured and luminous effects. It is an object that urges the observer to look and touch it, allowing himself to be seduced by the games created by the sequence of lines that flow across its surface: reliefs and creases in the material create irregular variations in thickness, making the lamp unmistakable, even when it is switched off.

Gem is a top-quality item that declares at first glance the superior value of the material, the fine craftsmanship of its manufacturing process and the culture of its design. Its satin-finish blown glass embraces the light source and diffuses a warm, soft light into its surroundings.

Gem is the new, captivating chapter in the almost twenty year-long partnership between Foscarini and the couple of Italian designers Ludovica and Roberto Palomba, which has led to outstanding successes such as Rituals and Tartan. Their research explores the expressive possibilities of a material with a thousand-year tradition, namely blown glass, interpreting it in the light of contemporary design and enhancing the value of its prestige by means of exclusive workmanship, capable each time of challenging the complexity of the craft-based production process.

Gem is also available as a table lamp. 400" length cord is available on request (please call the hive showroom to specify).