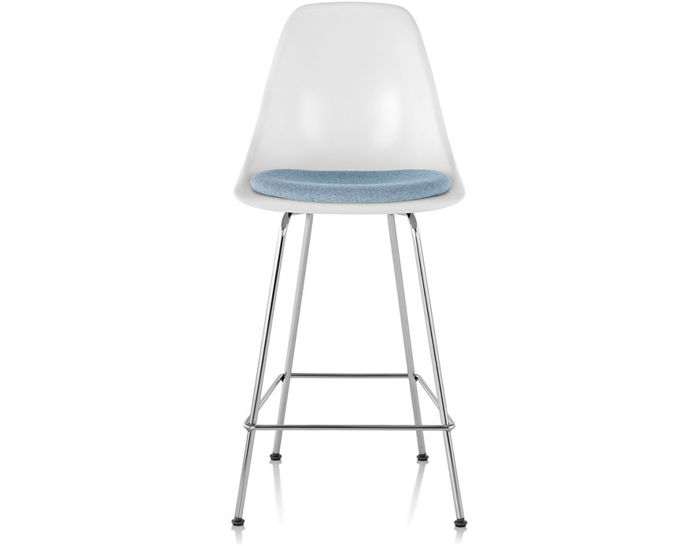 The familiar form of the Eames Molded Fiberglass shell sits atop a 4-leg base design that makes it an ideal seating option at bar- or counter-height surfaces. Thanks to advances in safe fiberglass composition, the Eames' distinctive single-shell form is safely produced by means of a less volatile, monomer-free "dry bind" process. The process for making shells and the nature of fiberglass give each shell unique character traits that may include some surface cavities, areas of lighter or darker color, or faint circular shadows where stool base is attached to shell.

The Eames stools represent the evolution of Charles and Ray Eames' iterative process, which continually pushed the boundaries of what a single-shell chair could be. The seat and back are formed of a single piece of molded fiberglass with waterfall edges. The Eames fiberglass stool is offered in a choice of base colors and the shell can be specified in a variety of archival colors. The fiberglass shell can also be upholstered in an array of textiles. Black and chrome 4-leg bases are provided with black glides while the white 4-leg base has white glides. The upholstered seat pad comes affixed to the Eames molded shell and available in a variety of fabric or leather upholstery options.