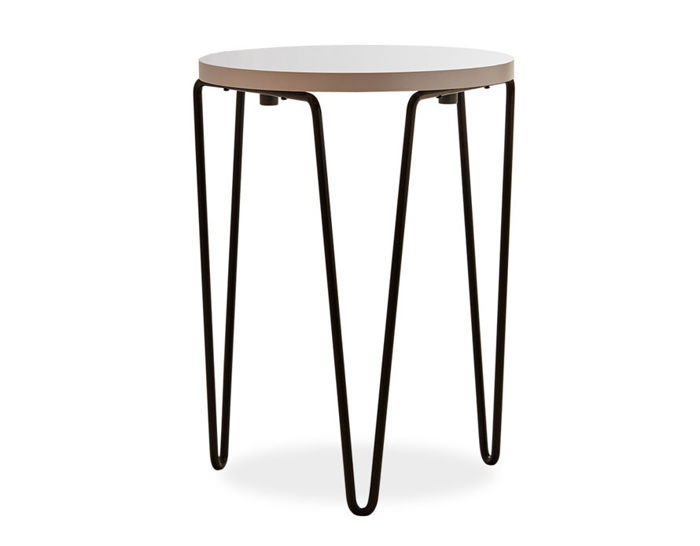 First introduced in 1948, Florence Knoll's Model 75 stacking stool was an instantly popular addition to what was then still a small catalog of furnishings from Knoll Associates. With its ingeniously simple three-pronged wire base granting it its "hairpin" moniker, the Model 75 stool is now reintroduced as the Hairpin Stacking Table.

While She based the compact design on earlier studies using steel rods at the Cranbrook Academy of Art, other reports cite the iconic 1933 wooden stacking stool designed by Finnish modernist Alvar Aalto as an equal influence. Whatever the stimulus, the final result was an exquisite composition with its proportions calibrated by Florence Knoll's exacting eye. The design remained in production until 1966 and was only briefly reproduced in 1981 for the Innovative Furniture in America exhibition at the Cooper Hewitt Museum in New York.

The Model 75 stool has been reintroduced as the Hairpin Stacking Table, which will be made with either a powder-coat or chromed steel base and MDF top sandwiched between laminate with laminate edge. The woodgrain laminates tops have matching woodgrain ABS edge. The table can stack five high and Includes three nylon bumpers underneath the top to prevent scratches when tables are stacked. As Florence Knoll always intended, the Stacking Table does not just hold its own as a timeless piece of design-it proves its true value in its ability to round out the composition of any inhabited space.

By the bed, in the library, or in the nursery, the Hairpin Stacking Table demonstrates Florence Knoll's knack for good design not simply in the succinctness of its form, but the sheer versatility of its uses. But perhaps it was Charles Eames, a fellow classmate and designer from the Cranbrook Academy of Art, who said it best. "Each time I go East I see something you have done," he wrote to Florence Knoll in 1957. "It is always good, and I feel grateful to you for doing such work in a world where mediocrity is the norm."


$276.00 + free shipping
(please allow 8-12 weeks for this special table to be created and shipped to your location)

based on 3 reviews
average rating: 4.5