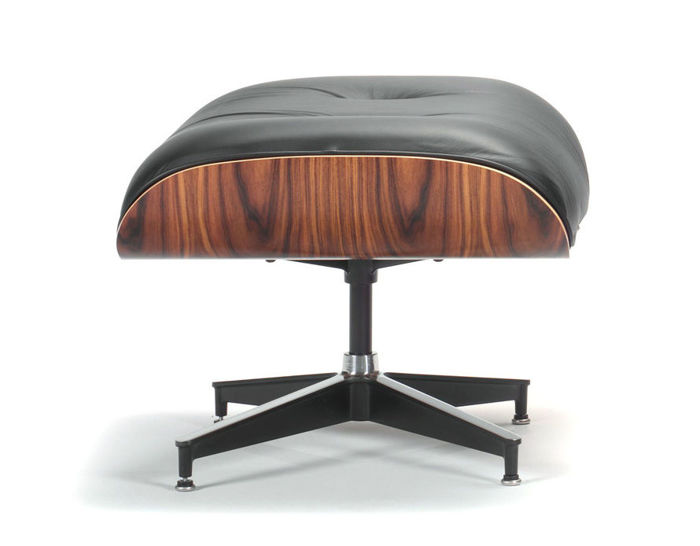 The Eames lounge ottoman is the culmination of Charles and Ray Eames' efforts to create comfortable and handsome lounge seating by using production techniques that combine technology and handcraftsmanship. Its heritage goes back to the molded plywood chairs pioneered by the Eameses in the 1940s. The Eames ottoman is considered among the most significant and collectible furniture designs of the 20th century and is part of the permanent collection of New York's Museum of Modern Art.

Charles Eames said his goal for the chair was the "warm, receptive look of a well-used first baseman's mitt." Every one is a special refuge from the strains of modern living.

The first lounge chair and ottoman, produced in 1956, was a birthday gift for friend Billy Wilder, the Academy Award-winning film director, and it made its public debut on Arlene Francis' Home show, which later became the Today show.

Every ottoman manufactured since the original has received the same meticulous handcrafted attention. The rich veneer and supple leather suggest old-fashioned luxury translated into modern forms, setting an enduring standard for comfort and elegance. In addition, the ottoman is now available in a veneer called santos palisander, a lustrous veneer that has the same characteristics as the original rosewood, color and grain.

The ottoman has 6-inch thick urethane foam cushions and rich leather upholstery available in your choice of colors. The wood is harvested exclusively from sustainably managed forests and is available in a variety of finish options. All pieces are hand assembled.
read more...
$1,645.00
more information